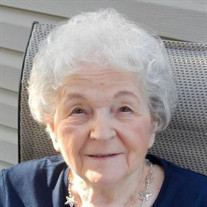 Bernice Mark age 88, of Perry Township, passed away Sunday, Jan. 25, 2015. Born in Canton to the late Verner and Cora (Dunlap) Johns on January 31, 1926. She was retired from Gasser Jewelers where she was a Gemoligist. In addition to her parents,... View Obituary & Service Information

The family of Bernice Maxine Mark created this Life Tributes page to make it easy to share your memories.

Send flowers to the Mark family.