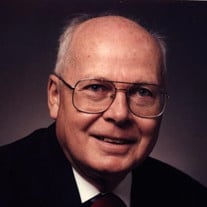 Carl W. Goodin, age 88, of North Canton, Ohio passed away Thursday, July 27th. He was preceded in death by his wife Alice C. (Messenheimer) Goodin; parents Jay L. Goodin and Myrtle L. (McClelland) Goodin; his siblings, Paul Goodin, Linn Goodin, Ruth Amiet and Helen Hoerger. He is survived by his daughter Sandra L. (Goodin) Pech and Richard J. Pech, and son Mark W. Goodin and Kelli (Saito) Goodin; grandchildren, Jeri A. Goodin, Thomas J.T. Goodin, Joseph C. Pech and Matthew J. Pech; ex-wife, Cleda Bartz, and his many friends (2-legged and 4-legged) that lived on and near his street. Thank you for being such kind and caring neighbors. Carl was born and raised in Canton, Ohio where he graduated from Lehman high school in 1949. He served in the U.S. Navy from 1949-1953, married in 1954 at Trinity U.C.C. (Canton, OH), attended Kent State University 1953-1956, where he graduated with a degree in Mechanical Engineering. He worked for Convair (San Diego, CA), Nasa Plum Brook Station (Sandusky, OH), General Dynamics (San Diego, CA), Westinghouse (Pittsburg, PA), and then returned to North Canton, Ohio in 1967 and worked for the Hoover Company until 1996 where he retired after 29 years of service. Carl was a kind, loving father, grandfather, and neighbor who would do anything to help others. Carl was an active member of Zion U.C.C. North Canton, and an avid tennis player for many years. He enjoyed photography, fishing, boating, flying his Skyhawk aircraft, woodworking, walking, working in his yard, feeding the birds and deer that visited, and tracking the weather. The service will be held at Schneeberger Funeral Home, Wednesday, July 3rd at 11:00 a.m. with Calling hours on Tuesday, July 2nd from 5:00 – 7:00 p.m. and 1 hour before the service on Wednesday, July 3rd. Burial will be at the North Canton Cemetery on Pittsburg Road, North Canton. In lieu of flowers, donations may be made to The Wilderness Center (Wilmot, OH) or Aultman’s Compassionate Care Center. To share a memory or send condolences, visit us www.SchneebergerFuneral.com Schneeberger 330-456-8237

The family of Carl W. Goodin created this Life Tributes page to make it easy to share your memories.

Send flowers to the Goodin family.