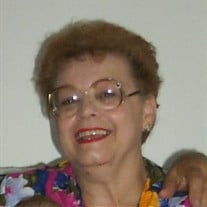 Carol A. (Sponseller) Fenningsdorf, age 76, passed away 3 days shy of her 77th birthday on February 17, 2020 at the home of her son and daughter-in-love after a very short battle with cancer. On February 20, 1943 a beautiful baby girl was born to Ray and Ruth (Rupert) Sponseller. She was a graduate of Louisville High School Class of 1961. Working as a nurse's aide, she met the love of her life Ronald Fenningsdorf while he was a patient at Battlecreek Hospital. From the minute he laid eyes on her Ronald pursued her and was determined to make her his wife. They were married on August 20th, 1963 at Fairhope United Methodist Church in Louisville, Ohio. Over the 56 years together they had two boys, Kevin and Jeffrey. They were five years apart. In between the two pregnancies she suffered a devastating miscarrage. She always talked about meeting him/her in heaven some day. In 1997 Jeffrey married Melanie (Mohr). She always said that she got the daughter she always prayed for. In January of 2000 her first born son, Kevin died very unexpectedly. As you can imagine she was devastated. When her first grandchild Noah was born on May 15th, 2001 this revitalized her. Soon after on November 21, 2002 her second grandchild Abigail was born. She loved her grandchildren very much. Carol was a homemaker most of her life. She enjoyed family gatherings, taking care of her family, and jewelry. She was very adept at keeping her husband Ronald in line. They retired to a five acre farm in Navarre Ohio enjoying the rural life they always wanted. Before the end of her life Carol got to proudly watch her grandson Noah graduate from Perry High School, enjoy nature at her camper, and spend every day with the people and doggies she loved. Carol will be missed, but we know that her story here on earth had to come to an end. After a lifetime of waiting, and believing she made it to the loving arms of Jesus. Carol was preceded in death by her father, Raymond Sponseller; mother, Ruth (Rupert) Sponseller; Sister, Deborah (Sponseller) Crock; Son, Kevin Fenningsdorf; and Nephew, Eric Sponseller. She is survived by her loving husband, Ronald Fenningsdorf; Son, Jeffrey (Melanie) Fenningsdorf; Grandchildren, Noah and Abigail Fenningsdorf; Sister, Cathy (Lee) Cecil; brother, Dean (Debbie) Sponseller; her Nieces, Nephews, cousins and friends. Services will be held Saturday February 22, 2020 at Louisville Christian Church 1800 S. Chapel Street Louisville, OH. Calling hours will be 2 hours before the service from 11 AM-1 PM. Service will start at 1 PM. There will be a dinner after the service provided by the church in the church hall. In lieu of flowers, please consider making a donation to help with the funeral expenses. To share a memory and read the complete obituary, visit us at www.SchneebergerFuneral.com Schneeberger 330-456-8237

Carol A. (Sponseller) Fenningsdorf, age 76, passed away 3 days shy of her 77th birthday on February 17, 2020 at the home of her son and daughter-in-love after a very short battle with cancer. On February 20, 1943 a beautiful baby girl was born... View Obituary & Service Information

The family of Carol A. Fenningsdorf created this Life Tributes page to make it easy to share your memories.

Send flowers to the Fenningsdorf family.