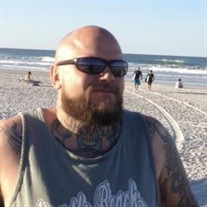 Cary Scott Thompson. Cary passed from our world on Sunday, January 9, 2022. His wife of 31 years, Angela Thompson, and four children, Patrick, James, Sara, and Alex, survive him, and will continue to live his life legacy, exemplified by the phrase, “Live Life to the Fullest.” If you knew this proud, shining example of a man, then you knew he demonstrated that life motto in all that he did. Cary’s is also survived by his parents James and Barb Thompson, and his older brother Mark Thompson. Cary enjoyed living the majority of his life in Minerva, Ohio, the same town he was born June 9, 1968. He enjoyed living in that quiet country town with his family and “extended family” that includes all of the younger individuals, friends of his children, that grew into honorary children of his own. These individuals came to know Cary as a father, and dear friend, of their own. The most important facet of life to Cary was family, and through his actions in life he grew a beautiful and strong family, with the unending support of his wife, that surrounded him with love and compassion until his final day. Cary served his country proudly in the United States Marine Corps and was a combat veteran who operated during the Gulf War in Operation Desert Storm/Shield. Following his dignified service in the military, service that he would always proudly reference throughout his life, Cary worked many different positions at the Timken Steel Corporation. His final position there was as a train operator, which he thoroughly enjoyed, as it got him out of the factory and into the steel yards where he could cruise around and ride the trains in the open air, always with a sense of enjoyment. He was also as big of a fan as any of American Football, as he grew up playing it in Minerva, and you could catch him watching it alongside his sons most days of the week. Furthermore, Cary was a spirited rider of Harley Davidson Motorcycles and enjoyed few things more than taking his fine-tuned bike out on a beautiful day with his wife clutching him on the back of it. Although, what Cary may have looked forward to the most though was spending time with his close-knit family on glorious family vacations. Here, he and his favorite people would visit places Cary enjoyed and felt most alive at, and together they would cherish amazing food, beautiful weather and nature, and simply each other’s company. His family will continue this tradition in his honor. If you knew Cary, then you knew he was a practical man who could always be helpful in just about any situation; certainly, a jack of all trades. He enjoyed using his hands to fix things, a trait seen not often enough nowadays. Cary was always buried in several projects around the house, constantly seeking to improve his little slice of paradise, the Thompson Homestead. He enjoyed collecting old valuables, some might say antiques, such as license plates, signs, tins, and various other knick-knacks that he would decorate the house and surrounding land with. And you cannot speak about Cary Thompson without mentioning his legendary cooking skills. This man could take a random assortment of items from the kitchen, items most folks would not know what to do with, and turn them into a comforting and delicious home cooked meal with ease. His soups in particular were known by all who were lucky enough to savor one with him. Along with his cooking, Cary was an excellent gardener and “farm-keeper,” taking care of goats and chickens year-round, and he found meditation and peace spending time outdoors tending to his nature work. A reliable and loyal man in every sense. A family man to the core. A man of his word. Underneath his rugged and tough exterior, a soft, loving, and compassionate man – one who gave the best hug you could ever receive. His laughter was contagious, his rage terrifying, his smile comforting, his hands calloused, his word true and to the point, his work never “half-assed,” his example always demonstrated, his Love… undying. Cary Thompson was a father, a son, a brother, a leader, a philosopher in his own right, a joke-maker, one to always get it done, one to lift you up when you fell down, one to always have a great time no matter the circumstances, and, above all, the highest example of what a Man should be. Cary Scott Thompson will always be loved, for the love he gave to those who were privileged enough to know him will last eternally. Cliché, yet never more true, Cary will live on through all those that he touched, for his personality was always affable and loveable. Even in death, Cary will continue to be a radiant example of how to be a loving man to all those who knew him. Thank you for the lessons, thank you for the Love. You will always be with us, and we shall see you in the next life. Semper Fidelis, Cary Thompson, and rest in peace. The celebration of Cary’s Life will be held on Saturday Jan 22, 2022 at the Courtyard by Marriott (330-494-6494), 4375 Metro Circle N.W., North Canton, OH 44720. Formal ceremony will be from 2pm- 5pm. Celebration will continue until 11pm. Rooms are held under “Cary Thompson Memorial”. In lieu of flowers please donate to either https://gofund.me/a3961ece “Help Support the Thompson’s in their time of need.” or to Angela Thompson’s Cash App “$myfam6” or Venmo “@Angela-Thompson-21”.

Cary Scott Thompson. Cary passed from our world on Sunday, January 9, 2022. His wife of 31 years, Angela Thompson, and four children, Patrick, James, Sara, and Alex, survive him, and will continue to live his life legacy, exemplified by the... View Obituary & Service Information

The family of Cary Scott Thompson created this Life Tributes page to make it easy to share your memories.

Cary passed from our world on Sunday, January...

Send flowers to the Thompson family.