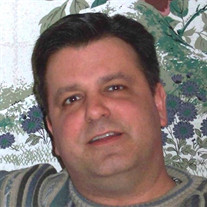 Christopher V. Lintner, age 53, of Jackson Township, passed away on January 10, 2016, at the Compassionate Care Hospice facility in Canton, Ohio. He was born September 13, 1962, in Detroit, Michigan to Albert V. Lintner and Betty J. Kajganic. His father was a bank president in Detroit, Michigan. His mother was a homemaker and former beauty queen from Warner Robins, Georgia. His step dad, Peter Kajganic, was a steelworker at Republic/LTV Steel in Canton, Ohio. He graduated from Jackson High School in 1980. Chris was the owner/co-founder of Buckeye Tax Service. He retired in early 2015 due to his battle with brain cancer. His interests included family, fishing, going to the shooting range, and flying remote controlled devices. His survived by his son and daughter Christopher and Amy Lintner of Canton, Ohio; brother Steve Lintner of Columbus, Ohio; nephew and nieces Sean, Halle, and Megan Lintner of Columbus, Ohio; uncle and aunt William and Helen Ellis of Newman, Georgia; uncle and aunt Randall and Cheryl Wright of Centerville, Georgia. He was preceded in death by his step dad and mother Peter and Betty Kajganic; father Albert Lintner. Funeral arrangements will be held on Saturday, January 16, 2016, at Schneeberger Funeral Home located at 2222 Fulton Road NW, Canton Ohio 44709. A viewing and calling hours will be held from 2 to 4 PM with a service to follow at 4 PM. In lieu of flowers, a tribute donation can be made to the American Brain Tumor Association (abta.org) in honor of Chris.

The family of Christopher V. Lintner created this Life Tributes page to make it easy to share your memories.

Send flowers to the Lintner family.