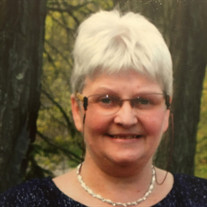 Cindy Sue Fowler Hale, age 62, of Canton, OH, went home to be with her Lord and Savior on Easter, April 21,2019. Cindy slipped away little by little over the past 10 years in her battle with Alzheimer’s disease and how Heaven’s choir is made a little sweeter with her voice added. The memorial service will be held on Tuesday, April 30th at 11:00am at Holy Trinity Lutheran Church on 55th Street and Middlebranch Street. Pastor Mark Williams will be officiating. Visitation will be held at the church the same day from 10:00am to 11:00am. Cindy was born in Lima, OH on April 16, 1957. She graduated from Oakwood High School and continued her education to receive a Bachelor’s of Science Degree in Education from Northeastern State University in Tahlequah, OK with majors in English and Journalism and a Master’s Degree in Education at Northeastern University in Boston, MA. Cindy lived and worked as an educator at Glenoak High School in North Canton, OH and as an educator and newspaper reporter in Oklahoma and Massachusetts for 28 years. Cindy finished her teaching career at Stark State College in Canton, OH. She adored her Miniature Schnauzers, Gatsby and Fraizer and loved to travel anywhere with them. Cindy was actively involved with the Alzheimer’s Association Greater East Ohio Chapter and won the Inspiration Award in 2012 at their annual Chocolate & Wine Affair. Cindy was a member at Holy Trinity Lutheran Church where she sang in the choir for many years. Cindy is survived by her son, Zachary (Abbey) Hale and Cindy’s grandchildren, Ziya Foxx Hale and Rebel Wolf Hale of Norman OK, her mother, June Thorp Fowler and sister, Leanne Fowler Hinkel both of Canton, OH, her brother, Michael (Peggy) Fowler and nephew Ethan Fowler of Millville, MA, her nieces, Sabrina Fowler of New York City and Alexandra Fowler of Kansas City, KS and her aunt, Ruth Van Huffel of Warren, OH. Cindy is preceded in death by her grandmother, Mary Thorp, father, Frank “Duke” Fowler, and ex-husband, Donald Hale. In lieu of flowers memorial donations may be given to Alzheimer’s Association Greater East Ohio Chapter at 408 9th Street SW Suite 4300 Canton, OH 44707 or Holy Trinity Lutheran Church at 2551 55th Street NE Canton, OH 44721. The family wishes to thank the staff @ JRC Adult Day Center for providing socialization and activities for Cindy for several years. The family cannot adequately express their thanks and appreciation for the loving care provided by the staff at Creekside Memory Care Unit at Jackson Ridge Rehabilitation. Facility placement is never an easy decision and the time and attention you provided to Cindy for these last 2 years was truly a blessing to her and her family. The family would also like to thank Mercy Hospice staff for gently guiding and supporting us as we said goodbye to Cindy. Rest in peace our sweet angel.

Cindy Sue Fowler Hale, age 62, of Canton, OH, went home to be with her Lord and Savior on Easter, April 21,2019. Cindy slipped away little by little over the past 10 years in her battle with Alzheimer&#8217;s disease and how Heaven&#8217;s... View Obituary & Service Information

The family of Cindy S. Hale created this Life Tributes page to make it easy to share your memories.

Send flowers to the Hale family.