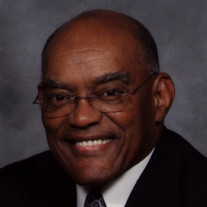 Pastor Clayborn C. Giles age 78, was fighting a good fight against cancer when on October 31, 2014 God declared him victorious and called him heavenward to receive his crown. He was born August 1, 1936 to the late Rev. George T. and Helen Marie Giles. Clayborn was a graduate of Warren G. Harding High School, Warren, Ohio. He further attended West Virginia State College, majoring in Elementary Education, The Ohio State University and then graduated from Moody Bible College in 1982. He was called into pastoral ministry in 1984 at the Mount Pleasant Church of God under the leadership of Pastor George Suddeth where he served as Assistant Pastor, Youth Pastor, Sunday School Superintendent and a member of the choir. Clayborn became Senior Pastor of the Sherrick Road Church of God, Canton, Ohio in 1983 where he served for 26 years. After serving as Senior Pastor he was duly elected as Pastor Emeritus. Pastor Giles also served as Interim Pastor of the Community Church of God, Campbell, Ohio and York Ave Church of God in Warren, Ohio. In addition to his parents, he was preceded in death by his sister, Markita Hairston; brothers, George T. Giles, Jr. and Jessie Giles. He leaves to mourn his loss, a wife of 54 years, Florence Giles; brother, Percy (Patricia) Giles, Dunbar, WV, sisters, Harriet Richie, Indianapolis, IN, Lillie Labarba, Martinsburg, WV, Freda (Isall) Witherspoon and Beulah Giles, both of Warren, Oh; a host of relatives, a multitude of sons and daughters in the ministry and an abundance of friends. Funeral services will be held Friday, Nov. 7, 2014 at 11 am at Sherrick Road Church of God. Calling hours from 10-11 am prior to services. In lieu of flowers, memorial donations may be made in his name to the Family Center of Sherrick Road Church of God. You may sign the online guest book at www.SchneebergerFuneral.com Schneeberger 330-456-8237

Pastor Clayborn C. Giles age 78, was fighting a good fight against cancer when on October 31, 2014 God declared him victorious and called him heavenward to receive his crown. He was born August 1, 1936 to the late Rev. George T. and Helen Marie... View Obituary & Service Information

The family of Pastor Clayborn C. Giles created this Life Tributes page to make it easy to share your memories.

Send flowers to the Giles family.