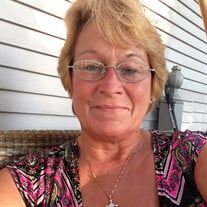 Debbie Sue Scott Age 60, of Louisville, passed away Sun., December 12, 2021. She was born April 29, 1961 in Canton, a daughter of the late Ellis and Helen (McCullough) Bush, grew up in East Canton, and had been a Louisville resident many years.... View Obituary & Service Information

The family of Debra Sue Scott created this Life Tributes page to make it easy to share your memories.

Send flowers to the Scott family.