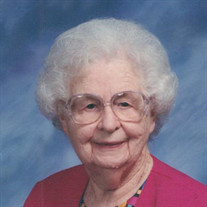 Delia (Luallen) Perry of Cleveland, TN, formerly from Canton, Ohio went to her heavenly home, April 2, 2015. Mrs. Perry was born in Haynes, Arkansas on October 19, 1915 and moved to Canton, OH in 1936. She was the daughter of the late Mollie Leatherwood Luallen and Charles W. Luallen. Her husband, Bert Perry, son, Waymond Perry and son-in-law, Wayne Chelette, her step daughter, Louise Bras, her stepsons, Vernon, Calvin and Lowell Perry, her brothers, Mervin, Claude, Daniel, Clarence, Leonard and Arnold Luallen, her sisters, Margie Luallen, Allie Johnson and Mary Jones also preceded her in death. She retired from the Canton US Postal Service in 1980. Mrs. Perry accepted Jesus Christ as her personal Savior at the age of 9 and was a Sunday School Teacher for over 40 years. She was a member of the Westmore Church of God. She is survived by one son, Joseph (Joan) Perry of Fairfax, VA, two daughters, Lois (Delbert) Rouse of O’Neill, Nebraska, and Yvonne Chelette of Cleveland, TN., seven grandchildren, fourteen great grandchildren, two great, great grandchildren and one sister, Louise Brannan of Farmington, AR. The Remembrance of Life Service will be held at 11:00 A.M. Saturday, April 11, 2015 from the Schneeberger Funeral Home, 2222 Fulton Road N.W. Canton, Ohio 44709 with Pastor Mike Durre officiating. Interment will follow in the Sunset Hills Burial Park in Canton. The family will receive friends from 10:00 until the service time at 11:00 on Saturday at the Schneeberger Funeral Home in Canton. In lieu of flowers, the family request that Memorials be made to The Caring Place, 130 Wildwood Avenue, SE, Cleveland, TN 37311, or Smoky Mountain Children’s Home, 560 Muncey Court, Sevierville, TN, 865-453-9413. We encourage you to share your memories and or condolences with the family by going to www.jimrushfuneralhomes.com .

Delia (Luallen) Perry of Cleveland, TN, formerly from Canton, Ohio went to her heavenly home, April 2, 2015. Mrs. Perry was born in Haynes, Arkansas on October 19, 1915 and moved to Canton, OH in 1936. She was the daughter of the late Mollie... View Obituary & Service Information

The family of Delia (Luallen) Perry created this Life Tributes page to make it easy to share your memories.

Send flowers to the Perry family.