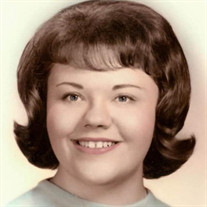 Denise Marie Walsh Brown, 72, of Canton, passed away the morning of January 13 and did so the same way as she lived: in dynamic fashion and surrounded by loved ones. The daughter of Thomas and Catherine (Sinnott) Walsh, she was born on August 7, 1949 in Akron. From her formative years growing up in Fairlawn, Denise subscribed to the notion that well-behaved women seldom make history. During summers, she’d travel with her father across Ohio, helping manage his games of skill business and driving his trucks from fair to fair. Life would take her to Hiram College, but it was national politics that truly caught her interest during these years. She fell in love with the intrigue, adventure, and strategy of the Republican Party but fell out just as quickly as it rallied around the Nixon Administration. Nevertheless, she would find love again with her husband of 50 years, Marshall, with whom she’d have four sons. Denise tirelessly loved and supported her children. She could often be seen – and heard – cheering on her sons at wrestling matches (where she was known as “Mama Brown”), at orchestra concerts, or any number of activities as her sons progressed through Hoover High School. She spent five decades engaged in her community: outside North Canton’s Hummel’s IGA, protesting rapid price increases in the 1970s; as a successful realtor at T.K. Harris; as Aultman Hospital’s first liaison to connect patients and their families in the 1980s through the mid-2000s; and ultimately, at the North Canton Public Library, where she loved working with her friends and helping children grow and learn. Denise was a student of history, especially all things Abraham Lincoln. She enjoyed Stephen King novels. But, most of all, she enjoyed warm smiles, listening to others, and somehow always making friends feel like family. She is survived by her husband, Marshall, and sons Jared (Amanda) of Columbus, Justin (Thatsani) of Massachusetts, Jesse of New York, and Jacob (fiancée Kimia Akhavein) of Virginia; and grandchildren Ari, Avery, and Jayda. Calling hours will be Friday, January 21 from 2-4 p.m. at Schneeberger Funeral Home at 2222 Fulton Rd NW, Canton, OH 44709, (330) 456-8237, https://www.schneebergerfuneral.com/. In lieu of flowers, donations can be made to Planned Parenthood. Schneeberger 330-456-8237

Denise Marie Walsh Brown, 72, of Canton, passed away the morning of January 13 and did so the same way as she lived: in dynamic fashion and surrounded by loved ones. The daughter of Thomas and Catherine (Sinnott) Walsh, she was born on August... View Obituary & Service Information

The family of Denise M. Walsh Brown created this Life Tributes page to make it easy to share your memories.

Denise Marie Walsh Brown, 72, of Canton, passed away the morning...