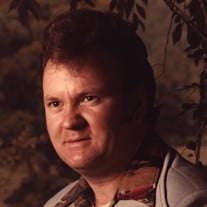 Dillard P. Howard lived to be 73 years old. He was born to Fred and Lona Howard and his siblings consisted of Richard, Ronald, Retha Sue, Barbara, Roger, Dennin and Carol. The family decided to leave the mountains of North Carolina when he was a teenager to make a life and find work here in Ohio. When Dillard was around the age of 18, he started working at The Timken Co. Steel Plant and during this time he met the love of his life and eventually the mother of his children, Sherrie. They had three beautiful children, Tim, Jody and Joanna. He served the Lord Jesus Christ his whole life. He helped his brothers build the church called Pleasant Hill Baptist Church. He was an active member and taught Sunday School. He started a Christian music group called The Gospel Sounds where he played rhythm guitar. They traveled around the Midwest and appeared on television at times. They were well known and loved singing God’s praises. Dillard was a hard worker and stayed busy his whole life. When he wasn’t working at The Timken Co., he’d be in the garage working on cars, or reading and studying his Bible, or helping out at the church.. When he retired around the age of 60, he stayed busy by riding his motorcycle, boating, fishing and camping. He wanted to do more though and started working for Stark D.D. where he was a driver and then a rider. He loved this job and was still employed after 13 years upon his death. Dillard was survived by his sisters, Retha Sue and Barbara; brothers, Roger, Dennin and Carol; his oldest and only son, Tim with his kids, Amber, Kelly, and Brandy; his middle daughter, Jody and her kids, Desiree, Sierra, and Madeline; his youngest daughter, Joanna and her kids, Jasmine and Crystal. Dillard loved his family and The Lord until the day he died. He was ready to go home to be with Jesus, his parents, and brothers. Homegoing services will be Wednesday, December 11, 2019 at Pleasant Hill Baptist Church at 5 pm with Rev. Barry Williams officiating. Visitation for family and friends will be from 3-5 pm before services at the church on Wednesday. Following the funeral there will be a potluck dinner. A covered dish of his favorite food or yours would be greatly appreciated. Let's all sit and talk and remember those times where friends felt like family. To share a memory or send condolences, visit us at: www.SchneebergerFuneral.com Schneeberger 330-456-8237

Dillard P. Howard lived to be 73 years old. He was born to Fred and Lona Howard and his siblings consisted of Richard, Ronald, Retha Sue, Barbara, Roger, Dennin and Carol. The family decided to leave the mountains of North Carolina when he was... View Obituary & Service Information

The family of Dillard P. Howard created this Life Tributes page to make it easy to share your memories.

Send flowers to the Howard family.