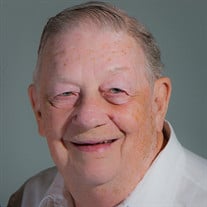 Donald E. Shoop, A longtime resident of North Canton, Ohio, passed in peace at the age of 89 on March 12, 2017. Donald (Don) was predeceased by first daughter Karen Ann. He is survived by his wife of 67 years, Marjorie; daughters, Larraine (Mike) of OH and Jackie Jones (Chris) of OH; son, Douglas (Barbara) of MA; seven grandchildren including Jennifer, Cliffton, Natalie, Hailee, Quinn, Alyssa and Julia, and six great grandchildren. Don is also survived by his brother Glenn Shoop and sister Ruby June Neff. He was born Dec. 21, 1927 in Kelly Station, PA to the late Harold and Mae Shoop. A graduate of Timken High School, Don was drafted into the U.S. Army and served during World War II as a Technician Sergeant. Following the war, Don returned to Canton where he met the love of his life and future wife, Marjorie (Margie) Miller and married in 1950. Shortly after they married, Don became a Linotype Printer with the Canton Repository where he served for 47 years. Mid-career Don and his newspaper buddy, Glen, formed GlenDon Carpet Cleaning which provided family support during a long strike and for several years thereafter. A few years before Don’s retirement in 1994, he and Margie made great friends and memories when they joined a Square Dance group, where they travelled to several states participating in regional contests and conventions. Don also became computer proficient, working on various newsletters and other creative activities right up until recently. A testament to his intelligence and love for printed media. In his retirement, Don and Margie began a new hobby by learning to quilt together. They spent hours creating beautiful keepsakes for family that will be cherished forever. Don was a faithful and involved member of Bethel Lutheran Church in Canton. Blessed with an amazing baritone voice, Don sang in the choir at Bethel for over 50 years. He was also actively involved in many other church activities including serving as Church Council President and on the Board of Trustees. He was a standout shortstop on Bethel’s competitive softball team, as well as being one of the top five bowlers in the Canton Christian bowling league for 30 years. His love for singing lead him to Canton’s barbershop “Hall of Fame Chorus” where he also became the HOF Chorus’ chief editor and producer of their regular newsletter for many years. He and his closest buddies also formed a quartet and went on to serve the community by performing doorbell-ringing, surprise candy-gram style barbershop quartet appearances for lucky birthday and anniversary recipients. Don leaves his family and friends with a wealth of joyful times, amazing and adventurous vacations, and a legacy of music. His family wishes to thank Dr. Louis Shaheen and the incredible doctors, nurses, aids, and palliative care group at Aultman Hospital, for their unending support and compassion during Don’s stay. A service and celebration of Don’s life will be held on March 25, 2017 beginning at 10:00 am at Schneeberger Funeral Home, 2222 Fulton Rd. N.W., Canton, OH 44709. Friends will be received following services. Memorial contributions may be made to the Arthritis National Research Foundation at www.curearthritis.org. Online condolences, share a memory or sign the online guest book may be left at www.Schneeberger Funeral.com. Schneeberger 330-456-8237

Donald E. Shoop, A longtime resident of North Canton, Ohio, passed in peace at the age of 89 on March 12, 2017. Donald (Don) was predeceased by first daughter Karen Ann. He is survived by his wife of 67 years, Marjorie; daughters, Larraine... View Obituary & Service Information

The family of Donald E. Shoop created this Life Tributes page to make it easy to share your memories.

Send flowers to the Shoop family.