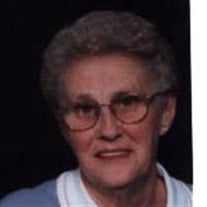 Eileen E. Wehr passed January 22, 2019 peacefully at home following an extended illness. Eileen "Big Ed" was born October 16, 1933 in Boston, Ohio to Welda and Edna Stephen. She grew up just outside Barnesville, Ohio until meeting and marrying her beloved Carroll on March 18, 1950. Eileen and Carroll then moved to Canton, Ohio a short time later with little Sandra, the oldest of their five children. Four more siblings, Daryl, Rodney, Deborah and Shawna, were to join her in the NE end of Canton where all of the kids went to school and Eileen settled into a long life as a mother and grandmother. Eileen loved to be physically active and started both a women's volleyball and softball team. Eileen was eventually inducted into the Amateur Softball Hall of Fame...because NO ONE could lay a ball straight down the right field line like she could! She also led her women's volleyball team to several undefeated seasons, even taking a team to the Senior Olympics and bringing home the gold! Eileen loved to play cards, especially Cinch and Euchre, spend time with family and friends at the "Cabin in the Wood" near Senecaville Lake, spend time with family for celebrations and watch grandchildren and great grandchildren play various sports. Eileen is preceded in death by her husband of 66 years, Carroll. Also preceding her in death are her daughters, Sandra Ott and Deborah Irvin, all in 2016. Eileen is survived by her brother, Robert Stephen of St. Clairsville. She is also survived by son Daryl "Butch" Wehr (Jeanne Milnes) of Canton, son Rodney Wehr (Deborah) of East Sparta, daughter Shawna Wehr (Sarah Hobdy) of North Canton and son-in-law Robert Ott of Canton. Surviving Grandchildren are Kimberly (David) Tolin of Canton, Joseph Ott of Massillon, Jeff Wehr of Dalton, Ashleigh Wehr of Navarre, Joshua Wehr of East Sparta as well as others in the Daytona Beach area of Florida. Surviving Great Grandchildren of "Mimi" Jared, Ryan, Brady and Carter Tolin of Canton, Austin Wehr of Dalton, and several others in both Magnolia and Florida. Eileen is also survived by her special nephew, Ronnie Jackson (Cookie) of Barnesville, Ohio and special niece, Katie (Tom, Danielle and Justin) of Ravenna, and Adopted granddaughter Mackenzie Horner. Eileen's family would also like to give thanks to Aultman Hospice nurse Rachel for her wonderful care of Mom.

The family of Eileen E. Wehr created this Life Tributes page to make it easy to share your memories.

Send flowers to the Wehr family.