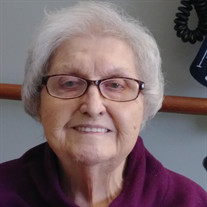 Emma Estock Winkleman died late on Wednesday, July 22, 2020 at Saint Joseph Senior Living of Louisville, Ohio where she had briefly been a resident. Born on November 4th, 92 years ago in Trail Run, Ohio she was the ninth of ten children of Stephen and Julia Fizak Estock and was the last surviving member of the family. Leaving Trail Run with her father during World War II and moving to Canton, Ohio, she graduated from McKinley High School. While living in Canton she met and married William Franklin Winkleman of North Industry, Ohio on August 2, 1947. William preceded her in death in 2006. Together they raised three children Laurie, Brad and Julia. Emma has four grandchildren, Kevin and Brian Lamm (parents Julia and Dale Lamm of North Canton, Ohio) and Kyle and Dacey Winkleman (parents Brad and Jo-Ann Whitmer Winkleman of Lynchburg, Tennessee). Her great grandchildren include sisters Alexandra and Evangeline Lamm (parents Kevin and Erika Lamm of Westerville, Ohio) and recently born twins Avery and Clayton Lamm (parents Brian Lamm and Tiffany Brown of Hartville, Ohio). She was also blessed with many nieces and nephews. While Emma was a full time wife, mother and homemaker, she also worked for Nilodor and Schmidt's Engraving. She had a lifelong comforting faith in God and regularly attended Fairhope United Methodist Church until the death of William. At Fairhope, she was a member of both the Pathfinders Sunday School Class and the Chancel Choir which at the time was directed by her daughter, Julia. Emma was a many year member of the Pilot Knob Women's Club. Emma took pleasure in the flight and chirp of birds which she enjoyed from her bedroom bay window while sipping tea or outdoors among her plants on the deck of the family home on Easton Street and then later in the backyard of daughter Laurie's home where she lived for several years. She was an eclectic and avid reader of novels, magazines and newspapers searching them for recipes and inspirational passages which she would snip and collect,. Cookies from the recipes would fill a dozen canisters at Christmas time which would frequently be the first stop for visiting grandchildren. Emma was happy to share her cooking skills teaching her grandchildren to make favorites such as apple pie and Slovak dishes like palatschinke. She shared many tea parties with her granddaughter Dacey, frequently conducted at that same bay window. She began visits asking for hugs and returning hugs which will now be greatly missed. Private graveside services will be held. To share a memory, send condolences or sign the online guest book, visit us at www.SchneebergerFuneral.com Schneeberger 330-456-8237

Emma Estock Winkleman died late on Wednesday, July 22, 2020 at Saint Joseph Senior Living of Louisville, Ohio where she had briefly been a resident. Born on November 4th, 92 years ago in Trail Run, Ohio she was the ninth of ten children of Stephen... View Obituary & Service Information

The family of Emma Winkleman created this Life Tributes page to make it easy to share your memories.

Send flowers to the Winkleman family.