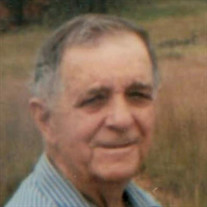 George Benner Age 94, of Canton, died Sunday, May 17, 2020 following a brief illness. George died peacefully at the home he built with his own two hands with his daughter by his side. He was born on February 23, 1926 in Canton. In addition to his parents, George and Pearl, he was preceded in death by his beloved wife of 64 years, Mary K. Benner and his son, Donald S. “Steve” Benner of Canton. He was also preceded in death by all six of his siblings; John (Jack), Blair, Robert, James, Thelma, and Marie. George is also preceded in death by nephews Joseph Baird, George ‘Butch’ Benner, Keith Hoff, and Leonard Hull. George is survived by daughter Pamela S. Benner of Canton; sisters-in-law Bernice Hull of Waynesburg, PA and Gladys Kelly of Jacksonville, FL; brother-in-law James Baird of Canton, OH; and sister-in-law Susan Benner of New York. He is also survived by many nieces and nephews whom he dearly loved, especially including Bill and Sheila Nickles, Shari Kelly, and Debbie Hull. In addition, he is survived by his beloved pet and constant companion, Katie. George was a proud member of the U.S. Marine Corps, having served in both World War II and the Korean War. He served in the South Pacific during WWII including Okinawa, Tinian, and Saipan; he was stationed in China during the Korean War. George personified being a member of the “greatest generation”. Following his military service, George worked for and retired from the Ford Motor Company with over 30 years of service. George and Mary loved to travel, and shared many road trips across America with various family members. He was an avid student of American history and loved to visit all the historic locations that he read about. George loved all animals and spent many leisure hours watching the various birds and critters that he fed in his front yard. He was a wonderful and loving husband, father, brother, and uncle. He always took care of everyone else, was always ready with a smile and a joke, and he will be greatly missed. Calling hours will be held at the Schneeberger Funeral Home on Wednesday, May 20th from 5:00pm – 7:00pm. A graveside service and burial will be at Sunset Hills Burial Park on Thursday, May 21st at 2:00pm. www.SchneebergerFuneral.com Schneeberger 330-456-8237

George Benner Age 94, of Canton, died Sunday, May 17, 2020 following a brief illness. George died peacefully at the home he built with his own two hands with his daughter by his side. He was born on February 23, 1926 in Canton. In addition... View Obituary & Service Information

The family of George Benner created this Life Tributes page to make it easy to share your memories.

Send flowers to the Benner family.