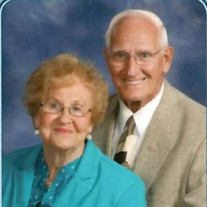 MEMORIAL SERVICES ARE NOW SCHEDULED. Memorial Services for Harold P. Sowers, deceased February 21, 2021, will be held on Saturday July 24, 2021 at 11 am in the Chapel of Trinity United Church of Christ 3909 Blackburn Rd Canton, OH 44718. Non Vaccinated attendees are required to wear a mask during the gathering. The family requests that in lieu of flowers, donations be sent to the Trinity United Church of Christ Good Samaritan Fund. www.schneebergerfuneral.com Schneeberger 330-456-8237 ORIGINAL OBITUARY Harold P. Sowers On Sunday February 21, 2021 Harold Paul Sowers loving husband of Pauline, father of 3 and stepfather of 4, passed away at the age of 87. Harold was born on July 24, 1933 in Brookville, PA to Charles and Jenny Burdelle Sowers. He attended Brookville High school, was President of his senior class, active in multiple choirs and played basketball. He enlisted, became a Sergeant in the U.S. Army, decoded Morse code as a Cryptographer during the Korean War and was stationed in Hawaii after the war. He worked as a Chemical Engineer and held the Production Supervisor position for General Tire (GenCorp) for over 40 years. Harold had a passion for travelling especially on cruises. He enjoyed dancing, boating, camping, physical and mental puzzles, and playing Aggravation. He loved to putter around his yard and his gardens were admired by the entire neighborhood. He loved participating and watching sports especially McKinley football and basketball games, and was a member of the McKinley Booster and Band Booster clubs. He loved his Bulldogs, Buckeyes, Cavaliers and more recently the Browns. He was quick with a smile, a laugh, or a funny story to share and had many close friends through his involvement in several organizations. A 45 year member of Trinity United Church of Christ, he ushered services and enjoyed participating on many of their athletic teams. He was the Treasurer of the Korean War Veterans Association Chapter 81, and a member of the Fraternal Order of Eagles McKinley Aerie #2370. He enjoyed working for the Hall of Fame Organization helping them with security, chauffeuring and was able to establish friendships with many of the Honorees throughout the years. He served his community by donating over 45 gallons of blood during his lifetime. He was someone you could always count on to help with a project (even if he ended up cutting the tip of his fingers with his saw) or give great advice. Preceded in death by: his parents, Charles and Burdelle, his brother, Robert. Survived by: his brother Wendell and Nancy Boyles (deceased); sister, Beverly and Kenneth (deceased) Byerly. His wife of 45 years, Pauline; his 3 children, Jacqueline and Fred (deceased) Klodt, Janet and John Varner, Pamela and Robert Jacks; his 4 stepchildren, Blaine(deceased) and Melissa McGaughey, Blair and Jennifer(deceased) McGaughey, Bruce and Jackie McGaughey, Beth(McGaughey) and Ray Iaea. He was a loving grandfather to 18 grandkids and 12 great grandchildren. Services will be held at a later date TBD. In lieu of flowers, donations to the Trinity United Church of Christ Good Samaritan Fund are greatly appreciated. To share a memory or send condolences to the family go to www.SchneebergerFuneral.com. Schneeberger 330-456-8237

The family of Harold Paul Sowers created this Life Tributes page to make it easy to share your memories.

Send flowers to the Sowers family.