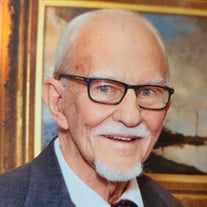 Hubert A. Howes a retired attorney and public accountant and long-time resident of North Canton, OH, died Sunday, March 14, 2021, at the age of 95. Hugh was well-respected for his professional judgment, integrity, and counsel and beloved by all who knew him. Hugh is survived by his children, Cindy Howes (Jeremy Ross), Gary Howes (Janet), Constance Howes (R. Kelly Sheridan), Cheryl Bogardus (Bruce), Cathy Clayton (Kent); his grandchildren, Ian Ross (Lauren), Matthew Howes (Sara), (Danny Triplett), Thomas Howes (Lindsay), Andy Howes, Michael Howes (Denise), Kelly Sheridan (Cortney Cusack), Kara DiNuccio (David), Rachel Albert (Daniel), Hayley Alinger (Dustin), Cali Cole (Zachary), Timothy Clayton, Crista Clayton; and 11 beloved great-grandchildren. He was predeceased by his wife Shirley Edwards Howes, his son Timothy Howes, his granddaughter Carly Howes Triplett, and his brother Edward. Hugh was born in Trafford, Pennsylvania to Hubert Howes and Constance (Atlee) Howes. He was a World War II Army veteran, a 1949 graduate in Business Administration from Kent State University and a graduate of the William McKinley School of Law in Canton, OH. Hugh and his wife Shirley had their own accounting and legal practice in North Canton for over 50 years. Hugh was a devoted member and supporter of the North Canton YMCA, enthusiastically playing volleyball and later pickleball until COVID-19 closed the Y last spring. All his life and especially in his later years, he was an inspiration to many for his dedication to physical fitness. Another of Hugh’s passions was playing the piano. He would seek out any piano he could find when he travelled and played every day at home. Throughout his life, he played in various bands and delighted in teaching piano. In addition to his love of music and sports, he was an avid nature lover and bird watcher. His patience and gentle demeanor allowed him to perch baby birds on his finger. Hugh was a member of the Greater Canton Writers’ Guild for many years. His creativity was abundant in his stories, and some of his jokes and humorous anecdotes were even published. Services will be private. In lieu of flowers, memorial gifts to the North Canton YMCA would be appreciated. Send condolences to the family at www.schneebergerfuneral.com. Schneeberger 330-456-8237

Hubert A. Howes a retired attorney and public accountant and long-time resident of North Canton, OH, died Sunday, March 14, 2021, at the age of 95. Hugh was well-respected for his professional judgment, integrity, and counsel and beloved by... View Obituary & Service Information

The family of Hubert A. Howes created this Life Tributes page to make it easy to share your memories.

Hubert A. Howes
a retired attorney and public accountant and...

Send flowers to the Howes family.