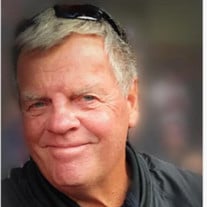 James "Jim" Corbett, age 76, passed away on Saturday, February 19, 2022. He was born in Canton, Ohio and lived in Louisville, Ohio, in an area he called "The best neighborhood ever." He was taken quickly and too soon from a massive heart attack. He graduated from North Canton Hoover High School in 1964. Jim was in the Army and fought in Vietnam from 1968-1969, earning a Bronze Star, Air Medal and a Purple Heart. He worked in construction his whole life, as did his father and brother. He was an amazing craftsman and could fix and build anything. His work ethic was in a class of its own. He is survived by his loving wife of almost 50 years, Debbie (Blair) Corbett, daughters, Kelly Barbato and Stacey Grigsby, son-in-laws (which he considered sons too) Ben Barbato and Justin Grigsby, grandchildren, his pride and joy, Lauren Barbato, Brock Barbato and Crew Barbato, brother, Eddie Corbett, sisters Kathy (Mike) Kintz, Cindy (Phil) Klempay, and Ellie Mae, his furry best friend and loyal companion. Preceded in death by his father, Edward Corbett and mother, Dorothy "Dot" (Nehlen) Corbett. Jim was one of a kind. His energetic personality and animated sense of humor touched the lives of so many. Everyone that met him, loved him. He was a devoted family man. Nothing made him happier than being with his wife, kids and grandkids. (and his grandkids friends, who also called him Papa) Jim also enjoyed playing golf with his wife and on Tuesdays in a golf league with his friends, cleaning & driving their Corvette, and lending a hand to anyone. He was always making sure his garage was in order. You would regularly see him with Ellie Mae, his boxer, sitting shotgun in his truck while running his errands. He was a man with integrity, loyalty and had the kindest heart you could ever meet. He will be greatly missed and forever cherished. Thank you for always being our rock. You were an extraordinary man. There will be calling hours at Schneeberger Funeral Home. 2222 Fulton Rd. NW, Canton, Ohio 44709, on Saturday, February 26, 2022, from 4 pm-6 pm with a Memorial Service given by Pastor Dan Hanson, starting at 6 pm. Please share your condolences and stories at: www.schneebergerfuneral.com. In lieu of flowers, memorial contributions in memory of Jim, may be made to Humane Society of Stark County. 5100 Peach St NE Louisville, OH 44641. Schneeberger 330-456-8237

James "Jim" Corbett, age 76, passed away on Saturday, February 19, 2022. He was born in Canton, Ohio and lived in Louisville, Ohio, in an area he called "The best neighborhood ever." He was taken quickly and too soon from a massive heart attack.... View Obituary & Service Information

The family of James J. Corbett created this Life Tributes page to make it easy to share your memories.

Send flowers to the Corbett family.