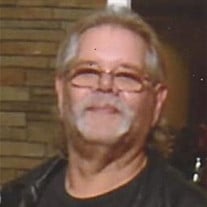 The Last Ride… Brown, Jeffry B. (Jeff). Age 64 of Canton, OH, went to be home with the Lord unexpectedly on November 12, 2017. Jeff was born in Canton, OH on December 29, 1952 to the late Jack B. Brown and Dora Lee Brown (nee Brant). He graduated from Jackson Local High School. Jeff worked lovingly alongside his parents for 53 years at Jeffry’s Marine. During his retirement, he enjoyed working on anything that had an engine in it and was a master mechanic. Jeff was a devoted Harley rider and had over 44 motorcycles throughout his life. He loved boating on the waters of Leesville Lake and spent his vacation time camping there. Jeff also loved family get-togethers and catching up with friends. Jeff was an avid bargain hunter and loved the thrill of the hunt. Jeff also frequently gave the “smug”, which Jack and Heather always teased him about. Jeff also recently obtained his CCW and was a handgun enthusiast. Jeff is preceded in death by his father, Jack B. Brown, mother, Dora Lee Brown, and his beloved Duffy dog. Jeff is survived by his loving wife of 24 years, Donna J. Brown. His children include Michelle (Brian) Simpson of Canton and Heather (Tom) Cunningham of Louisville. He had 5 grandchildren, Matthew, Brendan, Kaitlyn, Hannah, and Dylan. He also leaves behind his two fur-babies, Bernie and Harley. Jeff demonstrated the ultimate act of thoughtfulness and consideration for others by selflessly giving the Gift of Life by way of organ donation through Lifebanc. Memorial services will be Monday, November 20, 2017 at 4 pm at Faith Family Church where friends and family will gather from 3-4 pm before services. A small reception will immediately follow at the church. “When someone comes into our lives and are gone too quickly, the memories left in our hearts, stay with us forever” I can do all things through Christ who strengthens me – Philippians 4:13

The family of Jeffry B. Brown created this Life Tributes page to make it easy to share your memories.

Send flowers to the Brown family.