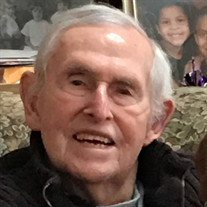 John E. Means February 18, 1930 – November 4, 2018 John Edward Means was born February 18, 1930 in Canton, Ohio to Francis (Bud) and Edrie Means. He had no siblings. John would graduate from Lincoln High School in 1948 and began to pursue his dream of being a law enforcement officer. His mother was hospitalized with cancer while he was serving in the military on the Korean Peninsula. A beautiful nurse named Dorothy Graham began taking care of Edrie. She adored Dorothy and introduced her son John to Dot through mail correspondence. John’s mom told him she would not send him chocolate chip cookies unless he wrote Dot. John, who came to be called Ed, from his middle name, began sending letters to Dot and that led to a long and loving life between the two. Upon his return from Korea they started dating and within a week Ed asked Dot for her hand in marriage. John Edward Means and Dorothy Louise Graham were married on August 7, 1954. In 1958 they moved to East Lansing, Mich., and while Ed attended Michigan State University, Dot worked as the head nurse of the nursery for the St. Lawrence hospital. Dot and Ed would move to Oak Park, where she continued to work as a floor and IV nurse at Mt. Carmel hospital in Detroit. Together they would demonstrate their loving nature and adopted their first daughter – Edrie (Edie) In 1962. Edrie became the first of four lucky children to be brought into the Means’ loving family. Upon Ed’s graduation from Michigan State University with a Master of Science, he and Dot moved to Washington, D.C., where he embarked on a career as a police advisor. In 1964 and 1966 Linda and John would join the family. Ed’s duties would keep him traveling around the world. Ed states that he "was in awe" of Dot and her ability to care for the family while he was away in the field. In July, 1967, Ed was sent to Kinshasa in the Democratic Republic of the Congo to advise and assist the country’s police force against the growing terrorist threat to that country. The rest of the family move to live in the heart of Africa. Ed’s job was demanding, by hosting many dignitary receptions often times consisting of dozens of people in high ranking positions, while Dot worked along the side of Dr. Close (Actress Glenn Close’s father). Ed was the bodyguard for Neil Armstong while he visited the Congo on his world tour after landing on the moon. He was also head of security detail for Mohammed Ali’s historic fight with George Foreman, the “Rumble in the Jungle”. Both Ed and Dot returned to the United States in 1974, initially Ed would continue working with the International Police Academy in Washington DC. On December 7, Ed became the Chief of Police for Alliance, Nebraska. In 1976 they would welcome yet another daughter into their family; Hao was adopted during the Vietnamese Baby-lift. Ed designed a building that is still in use today that would combine the sheriff and police departments with the dispatchers next to each other. Both Ed and Dot were not happy working in Alliance and decided to move back to Washington DC, where Ed would begin working for the Drug Enforcement Administration (DEA) in July, 1976. Ed and Dot became a member of St. Mark’s in 1974 and was involved in many church activities and always offered a helping hand. Because Dot was a member of the Altar Guild for many years Ed spent many Sundays washing communion cups. Upon retirement both Ed and Dot would travel to Ontario where they have a lake cottage. They would spend time with their lifelong friends during the summer months. The winter months would be spent at their home in Alexandria with frequent visits up and down the eastern coast to spend time with their children and grandchildren. In his final week he was surrounded by his family. On November 4th, 2018 John Edward Means passed into the arms of God. He is survived by his four children, Edrie Means Weekly (Peter), Linda Crider (Philip), John Means (Trish), and Hao Williams (Ernie), 10 grandchildren, 5 great-grandchildren, sister-in-law Lee Grove, many nieces and nephews. A funeral service will be held at St. Mark’s Lutheran Church, 5800 Backlick Road, Springfield, Va., at noon Friday, November 9th. A viewing will be held between 10 a.m. to noon in the Narthex prior to the service. A second service and burial with military honors will be on Monday, November 12th in Canton, Ohio. Edward which means “guardian, protector” which fit his character well. He was a protector of his family and those he loved. And he had a great capacity to love and would give you the shirt of his back. He and Dot often opened their home to those in need. He was wise, loyal, honest, compassionate, empathetic and always there when you needed him, no matter what time of day or night. He will be greatly missed, but his love for his family and friends will live on. On Monday, November 12th a viewing will be held at 11 am to 1 pm with a short service at 1 pm at Schneeberger Funeral Home in Canton followed by burial with military honors at Forest Hill Cemetery. To share a memory, send condolences and read complete obituary, visit us at: www.SchneebergerFuneral.com. Schneeberger 330-456-8237

The family of John E. Means created this Life Tributes page to make it easy to share your memories.

Send flowers to the Means family.