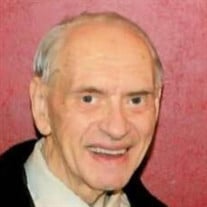 John Paul Walker (08/02/1946-01/14/2022) of Massillon went home to be with his Savior after a short illness. John was a beloved husband, father, brother, and friend. He is survived by his wife of 50 years Nondis; sons, Aaron (Sarah) and Nate (Michelle); six grandchildren (Brenna, Micah, Eden, Levi, Haven, Ellerie), and sisters Joyce and Jean. He is preceded in death by his parents Paul and Evelyn Walker, and a sister, Judy. John was a 1965 graduate of Minerva High School and joined the Air Force in August of that year. He was stationed in Long Island, New York during the Vietnam war where he served for four years. Upon discharge and return to Ohio, he worked as a brakeman for Penn Central Railroad and later was employed at Morgan Engineering. He married Nondis Roberts on August 14, 1971 and attended Southland Bible Institute in Kentucky where he earned a certificate in Bible studies. He received an Associates’ Degree in Mechanical Engineering from Stark State College and worked in the drafting department at Firestone in Akron, retiring in 2011. In retirement, John dedicated over 1,700 hours as a volunteer at Massillon Library and Affinity Medical Center. He also volunteered with the Massillon court system as a mentor for the Mens’ Challenge program. John and his wife attended The Gathering Place Church in Brewster. He had a passion for reading and a talent for storytelling. His amiable personality and warm sense of humor made those around him feel welcomed and loved. Services will be Wednesday January 19, 2022 at 11 am in the funeral home. Calling hours one hour before service from 10-11 am. Burial with military honors Thursday, January 20, 2022 at Ohio Western Reserve National Cemetery, Seville, Ohio at 11 am. To share a memory, send condolences, visit us at:www.SchneebergerFuneral.com Schneeberger 330-456-8237

John Paul Walker (08/02/1946-01/14/2022) of Massillon went home to be with his Savior after a short illness. John was a beloved husband, father, brother, and friend. He is survived by his wife of 50 years Nondis; sons, Aaron (Sarah) and Nate... View Obituary & Service Information

The family of John Paul Walker created this Life Tributes page to make it easy to share your memories.

Send flowers to the Walker family.