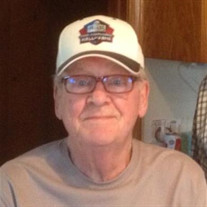 Joseph “Joe” Fete born on March 10th, 1937 in Canton, Ohio to the late Harold and Frances Fete White passed away June 22nd at his home surrounded by his wife Marie and daughter Kimberle. Joe graduated in 1955 from Timken Vocational High School. Joe’s love for sports began at a young age. While in high school Joe was all-city, all county and third team All-Ohio as a guard for Timken in 1955. He then had a 22-year career in the Canton City leagues. During his career he competed for the Police Boys’ Club, Pete’s Grill, Chuck and Dick’s Cafe, Jack’s Cafe, Log Cabin and Bob’s Diner. With Jack’s Cafe he won the BB Crown and Dover Tournament in 1963. He coached and played softball for Walthers Cafe for over 20 years. Joe was a high school official for 10 years. Joe was inducted into many amateur hall of fames through out his life. He was employed and retired from United Engineering. He loved to fish, travel, and paint, which he did all of his life. Joe was a member of the Canton Browns Backers where he would cheer on the Browns every Sunday! He never met a stranger, lived a blessed life and left a legacy of friendship and kindness to all who met him. Joe is survived by his loving wife Marie Popa Fete. Joe and Marie would have been married 60 years on November 21st, 2019, daughter Kimberle Fete, sister Dolores Thorley, brother Harold “Sonny” Fete, wife Nancy, sister Laura Welker, many nieces and nephews and many, many amazing friends. An addition to his parents, Joe is preceded in death by his close family friend Bob Williams, brother in law Alvin Thorley and his father and mother in-law Oliver and Violet Popa; stepfather, Herbert White. In lieu of flowers, memorial donations can be made to the Timken High School Alumni Association Fund: P.O. Box 8504 Canton Ohio 44711. The family would like to thank the caring staff at Mercy Hospice for the wonderful care he received. A memorial service will be Friday, June 28, 2019 at 5:30 pm followed by a gathering of family and friends to celebrate Joe’s life concluding at 8 pm. To share a memory or send condolences, visit us ar: www.SchneebergerFuneral.com Joe Fete ALWAYS A TROJAN! Schneeberger 330-456-8237

Joseph &#8220;Joe&#8221; Fete born on March 10th, 1937 in Canton, Ohio to the late Harold and Frances Fete White passed away June 22nd at his home surrounded by his wife Marie and daughter Kimberle. Joe graduated in 1955 from Timken Vocational... View Obituary & Service Information

The family of Joseph A. Fete created this Life Tributes page to make it easy to share your memories.

Send flowers to the Fete family.