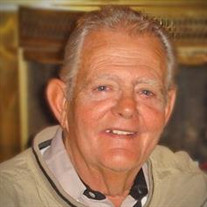 Larry L. Vanicek, age 73, of East Sparta, Ohio passed away peacefully with his loving wife, Lois by his side. Larry was born September 5, 1943 in Martins Ferry, Ohio, the son of the late Carol Bumgarner & Ernest Vanicek. He lived in Ohio all of his 73 years and retired from a lifelong career in car sales from Waynesburg Carriage. He proudly served his country in the U.S. Navy. Larry is survived by his beautiful wife, Lois (O’Brien). They have been truly blessed with endless love and marriage for almost 52 years. Larry was also blessed with five children, Laurie Zollars (Rodney) of Canton, Lisa Davis (John) of Hartville, Lynn Gainey (Rick) of Beach City, Larry L. Vanicek II (Jennifer Nettles) of Orangeburg, SC, and Leslie Calanni (Luciano) of North Ridgeville; thirteen grandchildren, Zachary& Dylan Zollars, Aleena, Aleksandr, Nikolai, & Stefan Davis, Brandon, Brianna, Brent, & Brock McDaniel, Isaac Reid, and Giovanni & Dominic Calanni; one sister, Dianna Bradley (Jim) of Ontario, CA; three sister-in-law’s, Kay Stebler, Donna Marks (Victor), and Darlene O’Brien (Rick Sanatore); and was a loving uncle to many nieces and nephews. In addition to Larry’s parents, he is preceded in death by his brother, Ernie Vanicek, Hallie& Bill O’Brien (in laws), and brother in law, Dan K. Stebler. Friends & family can be received at Schneeberger Funeral Home at 2222 Fulton Road NW Canton, Ohio on Sunday, October 16th from 4-6 pm. The funeral service will be officiated by Rev. Jim Nolte on Monday, October 17th at 1 pm. Prior to the service, there will be visitation from 12-1 pm. In lieu of flowers, donations in Larry’s name can be made to: Akron Children’s Hospital Center for Diabetes and Endocrinology. The Vanicek family would like to extend a special thank you to Dr. James Schmotzer and his staff at MorningStar Hematology & Oncology for their kindness and compassion as you not only cared for our dad, but comforted us too.

Larry L. Vanicek, age 73, of East Sparta, Ohio passed away peacefully with his loving wife, Lois by his side. Larry was born September 5, 1943 in Martins Ferry, Ohio, the son of the late Carol Bumgarner & Ernest Vanicek. He lived in Ohio all... View Obituary & Service Information

The family of Larry Lee Vanicek created this Life Tributes page to make it easy to share your memories.

Send flowers to the Vanicek family.