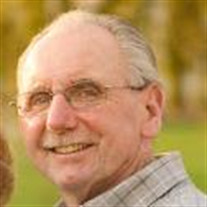 Larry William Vogt Sr., 74, passed away peacefully at Aultman Hospital on August 18, 2018. His love and devotion to his family supported him during his struggle and gave him peace. Larry was born to the late Frederick (Fritz) and Goldie Vogt on December 21, 1943. He graduated from Lincoln High School in 1962. Larry was a hard-working man. He served as an Auxiliary Deputy for the Stark County Sherriff’s Office, a Patrolman and later was promoted to Lieutenant for the Perry Township Police Department, he worked and retired from The Timken Company after 32 years, and continued to work as the foreman of construction for Homes by Ashley until 2007. Even after full retirement, Larry couldn’t settle, so he kept himself busy as a bus driver for Jackson Local Schools. Larry was blessed with a large and loving family. He married his wife of 41 years, Nancy Marie Black, on May 21, 1977 in Canton, OH. Together, they helped raise Larry’s three sons and had a daughter. He was devoted to providing for his family. Despite his busy schedule, he made time to attend important events and plan family outings and vacations with lakes, boating, and fishing. The memories he created with his family helped provide emotional comfort during his last few weeks. Larry was a passionate man. He was a perfectionist in everything he did. He was a woodworker at heart – a hobby he had in common with his own dad and also passed on to his first born son. He spent countless hours in his basement, building custom furniture for customers and family members. Each of his pieces were unique and special, and many of his custom wood mantels can be found in homes throughout the area. Although Larry continued to work after retirement, the flexibility of driving a bus allowed him to meet weekly for breakfast with his buddies, hunt down deals at garage sales during the days, and spend weekend mornings at flea markets with a good friend. He loved old cars, 50’s music, and telling jokes. In a nut shell, his life was full. Larry is survived by his loving wife, Nancy; his sons Larry (Kara), Brent (Julie), and Lee Vogt; his daughter Renae (Dan) Bucklew; his grandchildren Max Vogt, Jordan, Brooke, and Taylor Vogt, and Greta Bucklew; and his brother Fred (Carol) Vogt. He is preceded in death by his parents Fred (Fritz) and Goldie Vogt of Canton, OH. The family would like to thank the doctors, nurses, and staff in Aultman Hospital’s Intensive Care Unit. They provided exemplary care with kindness and grace. Their compassion provided comfort for Larry and the entire family. A visitation is scheduled for Friday, August 24, 2018 at Schneeberger Funeral Home from 11 AM to 1 PM followed by a funeral service at 1 PM with Pastor Duane Miller officiating. www.SchneebergerFuneral.com Schneeberger 330-456-8237

Larry William Vogt Sr., 74, passed away peacefully at Aultman Hospital on August 18, 2018. His love and devotion to his family supported him during his struggle and gave him peace. Larry was born to the late Frederick (Fritz) and Goldie Vogt... View Obituary & Service Information

The family of Larry W. Vogt Sr. created this Life Tributes page to make it easy to share your memories.

Send flowers to the Vogt family.