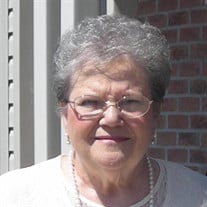 Laura M. Sledz, of Canton, Ohio, passed away Friday, March 24th 2018. Laura is survived by her loving husband of 63 years, Charles; son, Steven; beloved granddaughter, Carrie Jacin (Adam); beautiful Jack Russell Terrier, Jada. She will forever be remembered in the heart of her great grandson, Nolan. Laura was born March 15, 1935 at Kennedy Station in Lewis County, WV to Arley and Mildred (Frashure) Hawkins, both deceased. She was the fifth of six children and was preceded in death by two brothers, Eugene “Gene” Hawkins and Jerry Hawkins, and one sister, Lena Hawkins. She is survived by two sisters, Marie Summers (Lynn) of Parma, Ohio and Mabel Lechovich of Northfield, Ohio. Also surviving is a special friend and ex-daughter-in-law, Donna Rubel, and one 98 year old maternal uncle, Harold Frashure of Linn, WV. Laura graduated from Weston High School in 1953. During her senior year she worked afternoons for the City Attorney of Weston, John S. Holy, being paid fifty cents an hour. He could not give her more hours or more pay, so she moved to Cleveland, Ohio to seek employment. She worked as a secretary for various companies, among them Standard Oil of Ohio (now BP), Union Carbide, and retired from the Cuyahoga County Juvenile Court in Cleveland. Laura and her husband lived in Cleveland until 1968, when they moved to Brecksville, and lived there for 38 years until they could no longer maintain their property. They then moved to Canal Fulton, Ohio and lived there for 9 years before finally residing in Canton, Ohio. Laura has never forgotten her roots and still calls West Virginia “home”. Cremation has taken place and there will be no services. If you desire to do something for Laura, do something nice for a needy person. Arrangements have been taken care of by Schneeberger Funeral Home.

The family of Laura M. Sledz created this Life Tributes page to make it easy to share your memories.

Send flowers to the Sledz family.