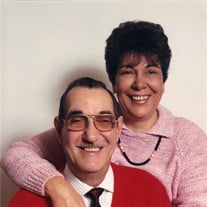 Mac Tash 95, left this earth to be with his Lord and Savior, Jesus Christ. Mac passed away peacefully on Monday, July 29th at home with his loving family by his side. He was preceded in death by his devoted wife Barbara Ann Tash, his son Gary Tash, and daughter Cheryl Tash Mowry. Also preceding him in death were his parents, Harry and Blanche Tash, sisters; Florence (Toots) Hager, Gloria Smith, and brothers Krist Tash and James Tash. Mac is survived by his loving daughter Maxine and son-in-law Will Logan, seven grandchildren Rachel, William and Patrick Logan; Jason, Eric, and Steven Mowry; and Ashley Southall Pinkerton; and five great grandchildren. He worked at Republic Steel as an electrician for 38 years, retiring in 1988. PFC Mac Tash proudly served his country in WWII as a combat infantryman in the European Theatre; Company L, 38th Infantry, 2nd Division from 1943-1945. He landed in Normandy on Omaha Beach on D-Day plus 1; June 7, 1944. His 2nd Infantry Division fought their way through the hedge rocks of Normandy and onto the Ardennes forest where he engaged in The Battle of the Bulge. Mac was severely wounded in The Battle of the Bulge on Dec. 18, 1944. He was awarded two purple hearts and one bronze star. He also received four battle stars; from the Central Europe Campaign, Northern France Campaign, Normandy Campaign, and the Ardennes Campaign; and many accompanying medals, ribbons, badges and commendations. Mac attended St. Haralambos Greek Orthodox Church, of which his Greek Immigrant father had belonged to. He was also a member of the Ohio Masonic Home and the Grand Lodge of Ohio Trinity Lodge No. 710. As an avid bowler, he had competed in many tournaments. His greatest joy was creating and working on projects at his home. He always had hammers pounding, saws whining, and drills blaring. He was a self-taught “do it all, fix it all” man; the original DIY. He had tremendous love for animals, especially dogs. The love for his family knew no bounds; his love and wisdom he shared will be sorely missed, as he will be. The family wishes to pay special thanks and gratitude to his selfless caregivers and to Southern Care Hospice. Calling hours will beTuesday, August 6, 2019 from 11 am to 12 noon at the Schneeberger Funeral Home. Pastor Rufus Hofelt officiating. Interment will follow in Warstler Cemetery with military honors. To share a memory or send condolences, visit us at www.SchneebergerFuneral.com Schneeberger 330-456-8237

Mac Tash 95, left this earth to be with his Lord and Savior, Jesus Christ. Mac passed away peacefully on Monday, July 29th at home with his loving family by his side. He was preceded in death by his devoted wife Barbara Ann Tash, his son Gary... View Obituary & Service Information

The family of Mac Tash created this Life Tributes page to make it easy to share your memories.

Send flowers to the Tash family.