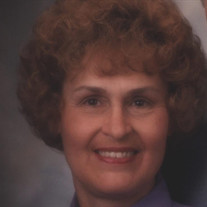 Madelyn (Sandy) Thomas, 83, returned to her heavenly home on 6/18/2015 after a valiant battle with a long illness. Her devotion to her family and her firm belief in God supported her in her struggle and ultimately gave her peace. Sandy was born to the late Robert and Ella Wacker in Beloit, Wisconsin. She dedicated her life to serving God as evidenced by her strong faith. Sandy was blessed with a large and loving family. She married the late Rev. Eugene Paul Thomas on October 7, 1950 in Beloit, Wisconsin and then attended Columbia Bible College (now known as Columbia International University) and they were later commissioned by Faith Community Church (previously Christian Tabernacle) of Canton, OH to be missionaries to Congo Brazzaville, Africa. Sandy helped raise her three children with patience, discipline, and humility. She home schooled her children until they were old enough to go to the missionary school. From the beginning, she dedicated her children to God and encouraged them to explore the beauty of the Gospel and taught them of God’s faithfulness. Sandy had a calling to bring God’s plan of salvation to the African people. While she was in Africa she became a Red Cross nurse and provided much needed medical care including everything from running a clinic, dispensing medication, tending to all kinds of wound care and even performing necessary surgeries and embalming. She was dedicated and willing to work long hours to meet those needs. She later authored "Beyond Jungle Walls" which describes the joys and trials of her life in Africa. She is dearly missed by her loved ones, who celebrate the fact that she is at peace with her creator. Sandy is survived by her sister Maxine Bertram, her three children, son Steven (Karen) Thomas, her daughters Joy (David) Flora and Patty (Doug) Miller, several grandchildren and great grand children .She is preceded in death by her husband Rev. Eugene Paul Thomas and son Eugene Paul Thomas, Jr. Services will be held at Faith Community Church 4301 Cleveland Ave NW Canton, OH 44709 on June 27 at 11 am. Family will receive friends one hour before. Sandy will be buried at Rose Hill Memorial Gardens in Massillon, OH with a reception to follow at Faith Community Church.

Madelyn (Sandy) Thomas, 83, returned to her heavenly home on 6/18/2015 after a valiant battle with a long illness. Her devotion to her family and her firm belief in God supported her in her struggle and ultimately gave her peace. Sandy was... View Obituary & Service Information

The family of Madelyn M. "Sandy" Thomas created this Life Tributes page to make it easy to share your memories.

Madelyn (Sandy) Thomas, 83, returned to her heavenly home on...

Send flowers to the Thomas family.