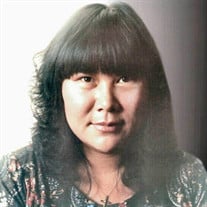 Myong Ae Rampelt March 3, 1949 to January 2, 2021, age 71. Born in Seoul, South Korea to the late Kyo Ho Cho and Ya Kum Kang. Survived by her older sister Myong Ok Cho and younger brother Sang Hyun Cho and 6 nieces and nephews; husband, Stephen H. Rampelt of North Canton, Ohio; daughters, Ellen M. (Mark) Dahlin and two sons of Dayton, Ohio, Diane I. Rampelt of Dayton, Ohio, Anna R. (Ken) Gifford of Columbus, Ohio. Myong grew up in Seoul. She was working in a restaurant as a waitress when she met her husband in 1976 while he was stationed in Korea in the Air Force. They married on August 10, 1977 in Korea and were happily married for 43 years. She was naturalized as a US citizen in 1979. When her husband retired from the Air Force in 1990 they moved to North Canton, Ohio. A former deacon at a Korean-American Presbyterian church in South Carolina, in later years she devoted herself fully to caring for her family and aging in-laws. When her in-laws moved to a nursing home, she visited them constantly, telling stories and singing songs to keep their spirits up. At home she was an avid vegetable gardener and taught herself how to play the piano. She was selfless and cared about her family above all. Her family's happiness and well-being was the core of her heart. Over the last year as her health slowly declined and mobility lessened, she still worried about them more than herself. Her sweet, kind, and loving spirit inspired her family and lives on with them. She will be remembered for her infectious laughter, which always brought joy into the lives of everyone she encountered. She will be sorely missed by all who knew her. Services will be private. To share a memory or send condolences to the family, visit us at www.SchneebergerFuneral.com Schneeberger 330-456-8237

The family of Myong Ae Rampelt created this Life Tributes page to make it easy to share your memories.

Send flowers to the Rampelt family.