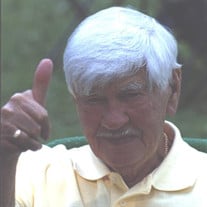 PAUL (Bettle) LIVELY age 85 of Sandyville passed away peacefully at Aultman Compassionate Care Center, Sunday, March 11, while his wife sang to him their favorite song, "I Love you Because," and surrounded by his loving family with both sons holding his hands. He was born July 18,1932 in Clear Creek, W.Va., son of Joe and Lula Lively. Paul was a graduate of Clear Fork High School in W.Va., served in the Army 1953-1955 and a retiree of The Timken Company. He enjoyed traveling with his wife, bowling, keeping his cars clean, playing with his grandchildren, great-grandchildren and watching them play sports and play in the marching band. He adored his cats, Jo-Jo and Bobby Lee and to watch the deer and birds in his backyard. Paul never met a stranger and became friends with everyone he met. He was so proud of the kids and always said with much pride, " There is not a lazy bone in the whole bunch." He is survived by his wife of 65 years, Lois (Poochie) Lively; sons, Josh (Sue) Lively, Paul Jr. (Kathy) Lively, son-in-law Neale Reigle, 10 grandchildren: Holly Myers, Kristina (Andrew) Wright, Anthony (Deedee) Reigle, Tabby Reigle, Anna Lively, Missy (Cody) Chapman, Sarah Lively, Julie (Nate) Miller, Paul S. (Leanne) Lively and Michael (Tiffany) Lively; 11 great-grandchildren: Kaylee Wright, Andrew Wright, Keeton Wright, Faith Wright, Erin Reigle, Ethan Miller, Noah Lively, Luke Lively, Parker Chapman, Molly Jane Chapman, Benjamin Chapman, and many nieces, nephews and cousins. Paul was looking forward to meeting an additional great-grandchild due in late July. He was preceded in death by his parents, Joe and Lula, 6 brothers: Orville, Frank, Robert, Lawrence, Eddie and Carl; 1 sister, Lucille; and beloved daughter, Belinda Sue (Lively) Reigle. Special thanks to the staff at Aultman Hospital's Coronary Care Unit and his caregivers at Aultman Woodlawn Compassionate Care Center. Paul's wishes were to be cremated with no viewing or funeral services. Although, a Memorial Service will be held, Saturday, March 17 at 1:00pm at Calvary Church of the Nazarene, 1200 Smith Ave SW, in Canton 44706. Donations may be made in honor of Paul's name to Aultman Compassionate Care Center, 2821 Woodlawn Avenue NW, Canton OH 44708. Please feel free to leave Condolences and Messages on our website for the family at www.SchneebergerFuneral.com

PAUL (Bettle) LIVELY age 85 of Sandyville passed away peacefully at Aultman Compassionate Care Center, Sunday, March 11, while his wife sang to him their favorite song, "I Love you Because," and surrounded by his loving family with both sons... View Obituary & Service Information

The family of Paul L. Lively created this Life Tributes page to make it easy to share your memories.

Send flowers to the Lively family.