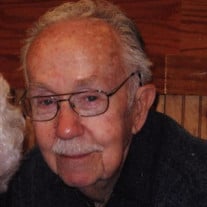 Raymond E Rauvola Ray was born in Warren, Ohio Feb 1, 1927 to Oscar and Thelma Rauvola, one of 6 boys of Finnish ancestry. He passed peacefully into Glory Sept 18, 2016 to be reunited with his wife, Mae. He was a graduate of McKinley High School. He was employed by The Pennsylvania Railroad then enlisted as a member of the U.S. Army infantry in World War II. He was among the first troops in Japan after the US bombing. After coming home, he worked at Republic Steel (LTV) until his retirement. He was one of the best spray painters at Republic, so he got to travel all over the country doing touch-ups for the company. He never really gave up painting. Whether by spray or brush, he was always working on a new project from cars to appliances to houses. He loved to travel - Las Vegas was his favorite place to visit. He and Mae also loved to visit Mountaineer and other local casinos where they made many friends. Ray never knew a stranger. He could go into a room of people and within a few minutes, everyone would know him. He loved to make people smile and laugh. He also loved going out to eat and knew most of the staff at the local restaurants. In his younger days, he was an avid fisherman but in his later years, he looked forward to working in his yard. He loved tending his flowers and shrubs and feeding all the birds and squirrels that happened to pass by. He would sit for hours watching the animals and birds. He was also a member of AARP, SOAR, and The American Legion. He attended Canton Baptist Temple services with his sister-in-law Lillian Rauvola. He was preceded in death by his parents, Oscar and Thelma, his wife Mae, and his brothers Ralph and Robert. He is survived by his daughter Becky Kemp, brothers Ron, Ken, and John, and grandchildren Ryan Kemp and Yvonne Zeh. Funeral service and burial will be private. In lieu of flowers, donations can be made to Crossroads Hospice.

Raymond E Rauvola Ray was born in Warren, Ohio Feb 1, 1927 to Oscar and Thelma Rauvola, one of 6 boys of Finnish ancestry. He passed peacefully into Glory Sept 18, 2016 to be reunited with his wife, Mae. He was a graduate of McKinley High School.... View Obituary & Service Information

The family of Raymond E. Rauvola created this Life Tributes page to make it easy to share your memories.

Send flowers to the Rauvola family.