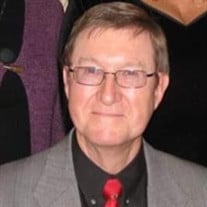 Ralph Quellhorst died surrounded by his family on June 23rd, 2020. He was 82 years old. He was born in Auglaize County, Ohio in 1937. Ralph is the son of the late Clarence and Aurelia Quellhorst. He graduated from Heidelberg University in 1959... View Obituary & Service Information

The family of Rev. Dr. Ralph C. Quellhorst created this Life Tributes page to make it easy to share your memories.

Ralph Quellhorst died surrounded by his family on June 23rd,...

Send flowers to the Quellhorst family.