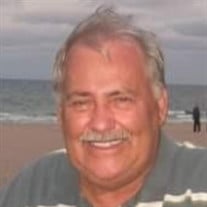 Well…it appears as though I have passed away. I never believed that this day would come so quickly, even after a few close calls. My parents, Fred & Pansy Gayheart did not know what was to come when they welcomed me into the world on September 5th, 1946. I was the 1st of the 8 children: Richard Lee Gayheart (That’s me), Danny Gayheart, Myra “Cookie” Agnes (m. Chuck Agnes), Dennis Gayheart (m. Mary Gayheart), Terry Gayheart, Deanna Steed (m. Steve Steed), Fred Gayheart Jr., Mark Gayheart (m. Michelle Gayheart) that they would have together, all of whom have outlived me. First to come, first to go! I attended High School in Massillon, Ohio! GO TIGERS! Faithfully served my country in the 173rd Airborne Division of the United States Army overseas in Vietnam. (Hooah!) I returned to Massillon and became heavily involved in numerous Veteran organizations. I married, had two children, Richard Gayheart Jr., and Deena Ponto, who between both of their families have given me 7 grandkids! I stuck around in Ohio for as bit and dreamed of moving south to sunny Florida. Hit a bit of a road bump, got smacked around a little by life and that led me into meeting the love of my life, my SHAARRROOON, My Sugar, the apple of my eye, the one I leave behind after 38 years of the best times of my life! She gave me and this world 2 more sons; Steven Gayheart and Michael Gayheart who between their families blessed me with 4 more grandkids. And what a blessed man I was! I made and lost many friends along the way, had a family a man could only hope to have, and a soulmate in my Sharon like no other. I was lucky to enjoy this life for almost 74 long and hard-fought years. I came in fighting. I stayed fighting. And then I left peacefully to be with my heavenly Father. Do not grieve for me because I’ve finally found my legs! I didn’t want a funeral because my last chance for a smoking hot bod was to be cremated. So, I leave you with this: In my many years of construction experience, I learned early on that if the foundation is strong everything else falls into place just right. Focus on the foundation of your faith and family, smile often, laugh a lot, pray more, and everything will work out just right!

Well&#8230;it appears as though I have passed away. I never believed that this day would come so quickly, even after a few close calls. My parents, Fred & Pansy Gayheart did not know what was to come when they welcomed me into the world on September... View Obituary & Service Information

The family of Richard L. Gayheart created this Life Tributes page to make it easy to share your memories.

Well…it appears as though I have passed away. I never believed...

Send flowers to the Gayheart family.