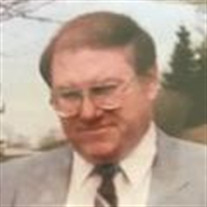 Richard Combs Henderson born June 21, 1946, went home to be with the lord September 25, 2019. He graduated from Virginia Polytecnic Institute in 1968. He was in the corp of cadets at Virginia Tech and after graduation he entered the army as a 2nd lieutenant. He spent a year in Vietnam earning a bronze star and leaving the military service as a Captain. He launched his career in business as a multi state Sales Manager for Berenfield Container traveling Michigan, West Virginia, Ohio, New York, and Pennsylvania. He retired in 2012. He had a lifelong love of history and this country. His main focus was the Revolutionary War and George Washington. He leaves to cherish his memory his wife Joan and his eldest son Robert and daughter-in-law Johanna Henderson, A daughter Margaret Prybuto and husband Tony and a daughter Jill Henderson. Four grandchildren Natalie Henderson, Christian Henderson, Clarissa Prybuto, and Isabell Prybuto. Preceding him in death his father and mother Merle and Freda Henderson. He will be missed by friends and family where he made his home in Ohio, but his true love was his home of birth Virginia. He is most proud of his grandson Christian who has followed him in the military tradition at The Ohio State University as a Naval Midshipman, not Virginia Tech which would be perfect but a close second. He was proud of the accomplishments of all of his children and grandchildren. They will live on and continue his legacy of accomplishment. Isabelle, his songbird in the singing Angels. Natalie with the caring heart for the downtrodden and last but but not least Clarissa always available to help. Thanking the Wade Park Doctors at the Veterans Hospital in Cleveland, Ohio who time and again came through for Richard in the last days of his care. He never regretted his service to his country because he truly believed in the freedoms that those before him had fought and died for. So let us rejoice that he is now at rest and free from pain and in the loving arms of his Savior. A celebration of life will be planned at a later date. Private burial took place in Ohio Western Reserve National Cemetery, Seville, OH. To share a memory or send condolences, visit us at www.SchneebergerFuneral.com Schneeberger 330-456-8237

Richard Combs Henderson born June 21, 1946, went home to be with the lord September 25, 2019. He graduated from Virginia Polytecnic Institute in 1968. He was in the corp of cadets at Virginia Tech and after graduation he entered the army as... View Obituary & Service Information

The family of Richard C. Henderson created this Life Tributes page to make it easy to share your memories.

Send flowers to the Henderson family.