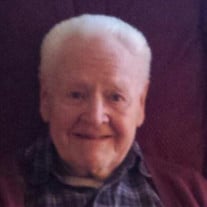 Richard Spradling age 95, passed away Tuesday, March 5, 2019. Born in Black Betsy, West Virginia to the late Christopher Cornelius and Sylvia (Wilson) Spradling on May 16, 1923. He was one of six children. Richard finished his education and then went to work at odd jobs. His father worked in the coal mines and he was next in line. However, the war was starting and he was recruited along with his best friend into the Marines at age 16. He had lied about his age, He was sent to Camp Lejeune, NC for basic training and his first assignment was as an MP. He learned to drive while at basic training, quote, “They just gave me the keys and said”, quote, “Drive!” Richard quickly became unsatisfied with his job as an MP and requested to be shipped overseas. He thought his friend would be going with him, but they were separated at this point. It didn’t take long… the very next day he was shipped out to Okinawa (1944). His tenure included Guadalcanal, Guam, and Iwo Jima. He served in the Corps Artillery as a heavy artillery gunman until 1945. In February 1948 he married Regina Marie Kerr, and they settled in Canton, Ohio. Four children , Nancy Jo Busnack, Patricia Ann (Carl) Michael, Karen Louise Spradling and Richard Alan (Lori) Spradling; seven grandchildren, Matthew Spradling, Dennis Thomas, Chris Thomas, Luke (Heather) Busnack, Iris Busnack, Samantha (Mike) Aleman, Ricky Spradling; great grandchildren, Mason Thomas and Emme Thomas. He stayed in Canton working many jobs to sustain his family: R & J Furniture, Republic Steel, and United Engineering where he retired as a steel mill laborer. Services will be Monday, March 11, 2019 at 11 am in the Schneeberger Funeral Home with Pastor Jared Weimer of Faith Bible Church officiating. Burial will follow in Forest Hill Cemetery with military honors. Calling hours Sunday from 2-4 pm in the funeral home. Special thanks to caregivers: Jane Fausnight, Christine Babcock, and Shantay Shannon and Debbie Huffman. Thanks to Crossroads Hospice for their compassion and care. To share a memory or send condolences, go to: www.SchneebergerFuneral.com. Schneeberger 330-456-8237

The family of Richard Spradling created this Life Tributes page to make it easy to share your memories.

Send flowers to the Spradling family.