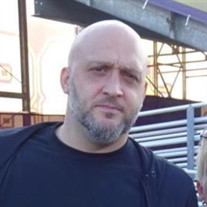 CANTON - Richard J. Wakeley, age 41, passed away very unexpectedly on Saturday, November 27, 2021. Rich was born September 2, 1980 to Darryl and Kathy Wakeley. He attended GlenOak High School and then attended and graduated from Massillon High School, Class of 1999. He also obtained his Barber’s license and had been a Master Barber for over 22 years. He recently was working at Star Struck Haircuts. He was proud of his work and made sure all his customers were satisfied with their fresh cut and shaves. He was a Cleveland Browns and Florida State Fan. Rich was preceded in death by Paternal Grandmother, Marlene “Sue” Wakeley, and Maternal Grandparents, Robert and Mary Rock and one cousin, Kylie Rock. He is survived by his Parents, and his sons that he adored and loved very much, Jancyn and Wyatt, Paternal Grandfather Richard Wakeley, Uncle Joe (Rhonda) Wakeley, Aunt Michele (Tom) Birklund, Aunt Marcee (John) Byrd, Aunt Barb Gose, Uncle Brian Rock, and numerous cousins. He was loved by many and will be greatly missed by all. The Family has decided not to have calling hours and will have a private service at a later date. In lieu of flowers, please make a donation in his name to Refuge of Hope, 715 2nd St NE, Canton, OH 44704 To share a memory or send condolences, visit us at www.SchneebergerFuneral.com

The family of Richard "Rich" Wakeley created this Life Tributes page to make it easy to share your memories.

Send flowers to the Wakeley family.