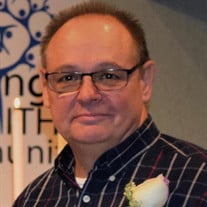 Roger A. Mick August 01, 1954 - May 22, 2019 Roger A. Mick, age 64, of Canton, passed away on May 22, 2019 in Canton, Ohio. Roger was born in Dennison, Ohio to William Mick and Alice Stenger (Mick/Grogg) on August 01, 1954. He married Sharon L. Mick (Kohl) on November 20, 1976 in Canton Baptist Temple. Roger worked last for Sterilite in Massillon, Ohio for about 22 years. He started out there as a machine maintenance technician and worked his way up to a plant manager. Roger enjoyed his job as well as his coworkers. He was dedicated to Sterilite so much that he insisted on working during radiation and chemotherapy treatments due to laryngopharyngeal cancer. Roger was also dedicated to his family, he would do anything for them. Roger will always be remembered as a loving, caring, stuborn, compassionate and loyal son, brother, friend, husband, dad, uncle and grandpa. He was the kind of guy that was not a sports fan, but endured watching them with his wife or son-in-law because they enjoyed it. He had a sharp personality, and enjoyed joking with or teasing others, especially if it was one of his two sisters. Roger was also the type that would never back down from an argument, which he proudly passed on to his daughter. He taught his children, to be respectful, persistent, and hard working, among many other things. Roger's favorite past times were playing with his electronical toys, fishing, camping, grilling, and relaxing with family and friends. Roger is preceded in death by his parents William Mick, Alice Stenger (Mick/Grogg) and James Stenger, sister-in-law Carol Kaoru Sato Mick, and wife of 42 years Sharon L. Mick (Kohl). Roger is survived by his daughter, Kimberly (Jose) Hernandez Mick; son, Jason (Aimee) Mick; sisters, Lynn (Mike) Osborne, Judy (Dave) Talbott; brothers, Bill (Carol Kaoru) Mick, Tom (Connee/ Cindy) Mick, Gary (Robin/Patti) Mick, Jimmy (Christine) Stenger; grandchildren, Serina and Daniel Hernandez Mick, as well as many nieces and nephews, brothers and sisters-in-laws, cousins, aunts and uncles. Funeral services will be held 11 a.m. Wednesday, May 29, 2019 at Schneeberger Funeral Home, 2222 Fulton Road N.W., Canton, Ohio 44709 with the Major Thomas Perks of The Salvation Army of Massillon, Ohio, officiating. An open burial will follow at Sunset Hills Memory Gardens. A wake will follow, and will be announced during closing services. To send condolences, share a memory or read the complete obituary, visit us at www.SchneebergerFuneral.com. Schneeberger 330-456-8237

The family of Roger A. Mick created this Life Tributes page to make it easy to share your memories.

Send flowers to the Mick family.