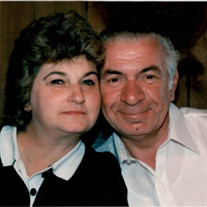 Ronald E. “Ronnie” Murray age 86, of Canton, Ohio, passed away on Wednesday, March 24, 2021 surrounded in love by his family. Ron has gone to be with his wife of 39 years, Cheryl D. Murray, who passed suddenly on August 16, 2020. A member of the Basilica St. John the Baptist Catholic Church, and a 50 year member of William McKinley Masonic Lodge # 431 F. & A.M, A.A.S.R.-Valley of Canton, and McKinley Lodge #2, Fraternal Order of Police. He was a proud member of the Canton City Police force from August 1957 until he retired after 34 years of exemplary service, with his “police dog” Duke in January 1991. Ron is survived by his beloved daughter, Tina Murray-Goff (husband David), treasured grandson Tyler Cook; brothers, Edward J. Murray (Joanne), George Murray (Diane), Thomas Schall (Annette), Fred Murray (Silvia), Gary Murray, Michael Murray (Donna), and John Murray (Catherine); sisters, Donna Jean Wolfgang and Linda Dunlap; daughter-in-law, Melanie Murray; sister-in-law, Pat Murray and many nieces and nephews, and his little dog, Sammi. He is preceded in death by his parents, James H. Murray and Burdella M. (Dunlap) Murray; son, Dennis R. Murray; brothers, Dale L. Murray and Kenneth H. Murray; sisters, Beverly Vodopich and Judith E. Murray; sister-in-law, Patty Murray. Ron was proud of his Irish heritage; you would often hear him singing an Irish tune as he walked through the house. Pop’s witty sense of humor always kept you guessing. He enjoyed photography, history and the TV show “Gunsmoke”. In the day, pops was an avid marksman, who won many shooting competitions. He also enjoyed golfing, and even called a hole in one on a par 3 hole at Rolling Greens Golf Course on April 28, 2003. A Mass of Christian Burial will be celebrated Wednesday, March 31, 2021 at 11 am in the Basilica of Saint John the Baptist by the Very Reverend John E. Sheridan, STL-Rector. Burial will follow in Saint John Cemetery. Visitation will be Tuesday from 6-8 pm in the Schneeberger Funeral Home. McKinley Lodge # 2 Fraternal Order of Police will conduct services at 5:30 pm and Wm. McKinley Masonic Lodge # 431 F. & A.M. will hold services at 5:45 pm before the visitation. The procession will form at the church on Wednesday before the mass. Memorials can be made to the FOP in Ronnie’s memory. To send condolences to the family, visit us at www.SchneebergerFuneral.com Schneeberger 330-456-8237

The family of Ronald E. Murray created this Life Tributes page to make it easy to share your memories.

Send flowers to the Murray family.