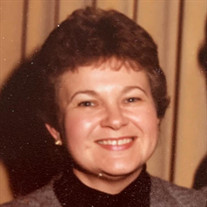 At 2:02 am on Tuesday, July 7, 2020, Sandra Roberta Maddy (Hall) quickly and peacefully slipped out of this realm, and into the heavenly. Sandy was born to Ruth Cooley and Robert Calvert on September 21, 1945 in Denton, Texas, soon to be adopted by Albert and June Hall. Although she grew up in Ardmore, Oklahoma with an adopted sister Eva Louise Hall-Barnes, she had a relationship with her biological half siblings Bill and Sharon Walrath. She graduated as valedictorian from Ardmore, OK High School in 1963, and cum laude from Central State College in Edmond, OK with a BA in education in 1967. Sandy married Wayne G. Maddy in Ardmore, OK on March 18, 1966. She taught English as a second language in Panama Canal Zone while Wayne served in the Air Force. After discharge from the Air Force, they moved to Sheffield, IL where Sandy taught high school English and Speech for 7 years at Western High School. After 20 years of marriage, she became pregnant with her only child Jessica June Parsons (Maddy). Sandy helped her husband launch a new business in livestock nutrition and balanced being a business woman, a mother, and home maker. Sandy was very active in church. Her relationship with her Heavenly Father was constant and dedicated. She studied and faithfully practiced intercessory prayer, and helped launch Tree of Life Church in 2001, in Massillon, Ohio. Sandy was a hands-on, doting grandmother to Gwynevire Wonder, Levi Augustus, and Abigail Alexandria Parsons. She helped raise them, nurture them, and teach them. Her absence will be felt, her wit and wisdom will be missed, but the love and insight that she imparted to her family and friends will be with us forever. A memorial service for family and friends will be held at Living Hope Christian Fellowship, 1620 Clark Ave. SW, Canton, OH 44706 on Saturday, July 25th, at 10:30am. Please share a memory or send condolences to www.SchneebergerFuneral.com

At 2:02 am on Tuesday, July 7, 2020, Sandra Roberta Maddy (Hall) quickly and peacefully slipped out of this realm, and into the heavenly. Sandy was born to Ruth Cooley and Robert Calvert on September 21, 1945 in Denton, Texas, soon to be adopted... View Obituary & Service Information

The family of Sandra Roberta Maddy created this Life Tributes page to make it easy to share your memories.

Send flowers to the Maddy family.