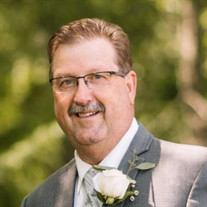 Stephen Kenneth Dye Stephen Kenneth Dye, 60, took Jesus’ hand as he went to heaven on January 9th, 2020. Steve grew up in Parkersburg, West Virginia and attended Parkersburg South High School. After high school, Steve attended West Liberty University where he met his wife of 36 years, Jodene. Steve began his teaching career in Belpre, Ohio, in 1981, then relocated to Morgantown, West Virginia, where he continued teaching and obtained a Master’s Degree from West Virginia University. In 1990, Jodene and Steve moved to Canton, Ohio where Steve taught Advanced Algebra at Jackson High School for 28 years. In addition, Steve taught remedial math at The University of Akron. In total, Steve taught math for 39 years. Steve loved Jesus Christ, his wife and two children, Devin and Elyse, and his son and daughter-in-law, Brandon and Briana. He embraced his church family at First Baptist Church in Canton, directing the choir, singing in the Hearts in Praise gospel quartet, and teaching Sunday school. He enjoyed watching Jackson High School, WVU, and Cleveland sports. Steve enjoyed music, singing the national anthem with the Jackson teacher quartet at many events and watching marching bands and Drum Corps International performances. Steve believed strongly in leaving a legacy and making a difference in other people’s lives. He was passionate about nurturing and inspiring his students beyond the classroom. His legacy of faith, love, encouragement, mentorship, and humor will live on through his children and students. Steve is survived by his wife Jodene, son Devin (Briana) Dye, daughter Elyse (Brandon) Cummings, father Kenneth Dye, sister Beverly Dye, sister Jenny Dawkins, brother David Dye. Steve was preceded in death by his mother, Vivian Beryl Dye. Steve believed in living a life of gratefulness. He did his very best to tell people how much he appreciated them. On behalf of our entire family, we want to extend our sincere appreciation for all the many ways you have come alongside our family during this difficult journey. Visitation will be from 3 p.m. until 7 p.m. Tuesday, January 14th, 2020, immediately followed by a celebration of life service. All events will be held at First Baptist Church of Canton, 4110 38th Street NW, Canton, Ohio 44718. In lieu of flowers, memorial donations can be made to the Steve Dye “Go Make a Difference” Scholarship. Checks can be made out to Jackson Local Schools and sent to 7600 Fulton Drive, Massillon, Ohio 44646. Please note “Steve Dye Scholarship” on the memo line. To share a memory or send condolences, visit us at: www.SchneebergerFuneral.com Schneeberger 330-456-8237

The family of Stephen Kenneth Dye created this Life Tributes page to make it easy to share your memories.

Send flowers to the Dye family.