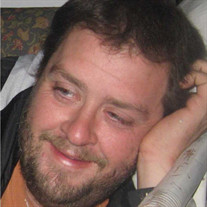 Steven Douglas Weaver ll 40 years old, of North Canton, passed away in Akron General Hospital on Feb.17, 2015. Steve had four cardiac arrests while in the hospital. The doctors were able to revive him from each one. Steve was put on kidney dialysis Feb. 16th. Early Tuesday morning Feb.17th he had another cardiac arrest. Sadly his body just couldn't take anymore trauma. The doctors were not able to revive him this time. We now have lost a huge part of our family, that has left all of us heart broken. Steve had the hardest fight of his life, and he fought hard to win, But God had other plans for him. God needed another good Angel. Steve had a lot to live for. He wanted to see Becca and Zach grow up. He wanted to walk Becca down the aisle. He wanted to see her grow up to be a kind and loving young lady. He wanted to see Zach grow up to be a strong and loving young man. Steve wanted to grow old with Julie and enjoy grandchildren in the future. Now, Steve is in Heaven where he will be their Angel, he will watch over and protect Julie, Becca and Zach. Steve was born in Canton, Ohio on Dec. 19, 1974 to Mary and Steve Weaver. Steve and Julie were married for 19 years, together they had two children, Rebecca 14 years old and Zachary 11 years old. Steve is survived by his parents Steve and Mary Weaver. His brother Scott, Grandmother Christine Bertram, nephew Tyler Weaver, his dog Jessie,and his cat Chester. Steve is also survived by Uncles and Aunts: Myra Owens, Darrel and Judy Weaver, Gary and Tabitha Weaver, and Denise Weaver. Mother and Father in law: Alice and Dean White. Sister in laws: Cherrie, Bobbi, Crystal, April, and Lisa. Brother in laws: Kasey, Joseph, Donald, Scott, Richard, Mike,and Dean. Nieces: Haley, Abby, Heather, Stefani, Victoria, Alexa, Mya,Rihanna, and Paylynn. Nephews: Jeffery, Andrew, T.J., and Jordan. Cousins: To many to name. Preceded in death by: Grandparents: Thornton Bertram, Vance and Nell Weaver, Aunts: Jean Grznar, Joan Hewitt, Uncles: David Owens, Ronald, Arnold, and Dick Weaver. Nephew: Josh Sickafoose. Steve was employed by Akro Painting and Wood, where he was a commercial painter. Steve loved taking road trips with Julie, Becca and Zach. He enjoyed remote control cars with Zach and his brother Scott. He also loved to cook, his specialties were chili and sloppy joes. Steve loved to fish and previously went on a fishing trip to Lake Erie with his brother in laws. Steve loved drag racing and for the past several years Steve, along with his dad Steve, Zach, Scott, and Tyler went to the NHRA Nationals in Norwalk, Ohio. They looked forward to this trip every year. Steve also enjoyed staying at home and spending time with his family .He also loved bon fires. I always called Steve, " Stevie" and that was always alright with him. Stevie was a gentle, loving, kind, and good hearted man. If someone needed help, they knew that they could depend on him. I had the pleasure of being his Mom for forty years. I would not trade those years for nothing in this world. Although, I wish I had another forty year! We all have so many happy, loving, memories of Stevie, that we will hold close to our hearts. We all love and miss you so much, Steve! Stevie will be greatly missed by many" Funeral services will be Sunday at 4 pm. Pastor Henry Dettweiler officiating. Calling hours Sunday from 2-4 pm before services.

Steven Douglas Weaver ll 40 years old, of North Canton, passed away in Akron General Hospital on Feb.17, 2015. Steve had four cardiac arrests while in the hospital. The doctors were able to revive him from each one. Steve was put on kidney... View Obituary & Service Information

The family of Steven D. Weaver II created this Life Tributes page to make it easy to share your memories.

Send flowers to the Weaver family.