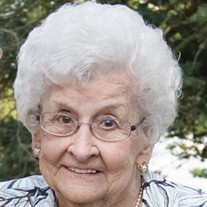 Sylvia A. Wood 1922 – 2016 age 93, of Canton, passed away on January 14, 2016, at the Canton Christian Home, where she made her residence for the past 10 years. Sylvia was born in 1922, to Finnish parents, Edward and Ida Sands in Aurora, Ohio. Along with her parents, she is preceded in death by her husband, John (Jack) F. Wood, sister, Lillian E. Brehm and granddaughter, Abbey E. Foltz. Sylvia graduated from Aurora High School in 1941. She spent her young adult life living in Cleveland, Ohio, working a number of jobs including helping the war effort. She married Jack in 1947 after he returned from World War II and lived in Aurora until moving to Canton in 1960. Sylvia was a member of Trinity United Church of Christ, where she previously served as Prayer Chain Chairperson and volunteered in the office. She also helped with the TUCC youth and served as a Girl Scout leader during the time her daughters were active. Sylvia was a charter member of her neighborhood garden club, Grow & Show, serving many roles and celebrating their 50th anniversary in 2012. Losing her father as a child, she cherished her family and adored her grandchildren and great grandchildren. Sylvia always honored her Finnish heritage by teaching her daughters and grandchildren the songs, stories, and food of Finland that was taught by her parents. Sylvia is survived by her two daughters, Nancy (Jeffrey) Foltz of Canton and Susan Wood (James) Stevenson of Coventry Township, Ohio. Grandsons, Jeremy (Katie) Foltz and Ryan (Becky) Foltz, both of Canton, granddaughter, Melanie (Matt) Tindell of Sagamore Hills, Ohio, great grandchildren, Grace, Claire, Samuel and William Foltz and niece, Geri (David) Kranz and family of Mentor, Ohio. A Memorial Service will be held Tuesday, January 19, 2016, 1:00pm at Trinity United Church of Christ, 3909 Blackburn Rd NW, Canton, Ohio, with calling hours beginning at 11:00am. Interment will follow at Warstler Cemetery. Contributions may be made in her memory to Trinity United Church of Christ and the Benevolent Fund of the Canton Christian Home, 2500 Cleveland Ave. NW, Canton, Ohio 44709.

The family of Sylvia A. Wood created this Life Tributes page to make it easy to share your memories.

Send flowers to the Wood family.