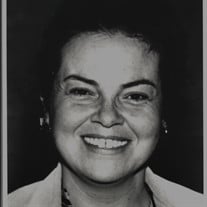 Virginia Ann (Ginny) Fuciu CANTON -Virginia Ann (Ginny) Fuciu, age 74, formerly of Boston, MA, passed away peacefully on March 11, 2022 in Cleveland Clinic Mercy Hospital. She was born October 29, 1947 in Canton, Ohio to the late George and Virginia (Marku) Fuciu. Virginia was a lifelong member of St. George Romanian Orthodox Church in Canton. She was a graduate of Canton McKinley High School (1965), Hiram College with a BA in Education (1969), and Cambridge College with a Masters in Education (1993). She was a lifetime educator teaching in the Brookline, Marshfield, and Waltham, MA Public Schools. Because of her love for dancing, she opened and operated Five Points Dance Studio in Holbrook, MA since 1996. Ginny is survived by her brothers George (Paula) Fuciu of Tucson, AZ, and Gregory (Chris) Fuciu of Canton, OH, and sister Vicky (Mark) Schafer of Canton, OH. Also surviving are nephews: Gregory (Kristin) Fuciu, Marcus Schafer, and Matthew Schafer; nieces: Pamela (Brent) Thompson, Shannon (Matthew) Kuhn, and Erika (Ryan) Hurless; great-nephews: Trevor Thompson, Nicholas Fuciu, Michael Fuciu, and Dylan Varner; great- nieces: Taylor Thompson, Samantha Varner, Addison Sfakianos, and Nikolina Sfakianos. The family wishes to offer a special thanks to Carole Herrmann, of MA, who was an immense help to Ginny during her illness, and to the doctors, nurses, and staff at Cleveland Clinic Mercy Hospital who brought her much comfort in her final days. Ginny's wishes were to be cremated, with the interment of her ashes next to her parents, at North Lawn Cemetery in Canton, Oh. A celebration of life will be held at a later date. Always Loved. Never to be forgotten. Schneeberger Funeral Home is entrusted with arrangements. To share a memory or condolences, please visit: www.SchneebergerFuneral.com. Schneeberger 330-456-8237

The family of Virginia Ann "Ginny" Fuciu created this Life Tributes page to make it easy to share your memories.

Send flowers to the Fuciu family.